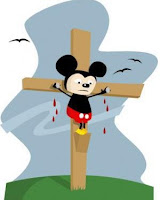 This image to the left is a joke at my own expense ... I have been fairly brutal about the whole Disney experience and this poor little mouse is now paying for it. I realize that I sound very misogynistic and cranky in these entries and had approached Disney with trepidation. I am still disturbed by the commercialism - with every major ride dumping you into a junk emporium of Disney merchandise and the silliness and cost of the merchandise. The parks that are filled to over capacity in peak season testing the patience of the most zealous Disneyophile. The exorbitant, ridiculous amount of food that is served and consumed. The cost of the whole Disney experience.

I am disturbed by the amount of waste produced -where does it all go? At the Orlando airport I asked an employee where the recycleables went and she said to throw it in the trash and that it is sorted later ... is this also how Disney deals with the waste? I think I will follow up on this.

I also resent the princess fantasies that the Disney corporation perpetuates for small girls. The simpering sweetness that sometimes passes for femininity. What does a princess do? NOTHING. A princess is admired for her beauty and waited on by underlings. Is that what we want our young women to become? I do not. Absolutely, I do not wish this for my daughter. It is a relief that she has no interest in this aspect of "femininity" at all.

Then again, when I was moaning to a friend about this he replied, "Why go if you don't embrace the whole thing?" True enough. And I am still susceptible to the Disney sentimentality. A recent re-viewing of Dumbo literally reduced J and I to tears. It certainly knows how to pull on the maternal heart strings. I have enjoyed many of its films - if only it wasn't attached to all this extraneous, useless stuff: the clothes, toys and useless knick knacks.

But I do see that it does bring people a great deal of pleasure. I can't deny that. Yes, I saw overburdened parents melting down at the parks, kids acting very badly, surly employees, exhausted families. But I also saw people who were absolutely thrilled to be there and working people who really seemed to like their jobs, genuinely. I don't oppose capitalism, frivolous consumer spending or pleasure (or the mixing of all three). I think it is the excess that concerns me most.

It was with a great deal of relief that I anticipated our trip home. We hustled to be out by 11a.m. and took one last trip to the Riverside Resort for an early lunch. Afterwards we rented bicycles for two and drove the girls around, clanging our bells, racing each other and generally acting like goofs around the perimeter of the resort.

We took the riverboat back and dipped into the pool one final time. We all had our last minute tasks: converting final meal credits into food we could take to the airport, last minute gifts, getting the girls out of their wet clothes. We left for the airport around 4p.m. as our flight was at 6.50p.m.

We have a travel Scrabble that we have been using all week. The games last forever. My goal is to whup my in-laws who are the king and queen of Scrabble matches (no easy task). The games last forever largely because we are hugely competitive and take our sweet time taking our turns. We played at the pool, on the bus, at the airport, on the plane ... at last count the s-i-l was whupping our butts.

The flight was pleasant and uneventful. The girls drew quietly while we played Scrabble and a woman on the plane complimented me on how sweet the girls were as we were leaving the plane. We landed just after nine and drove straight back to Toronto from Buffalo. At the airport we were already planning our next trip ... west coast? east coast? Europe? We work well together and I appreciate these trips with family. Home at 1.00 a.m. - how wonderful to sleep in your own bed!
Posted by A Lit Chick at 10:29 PM