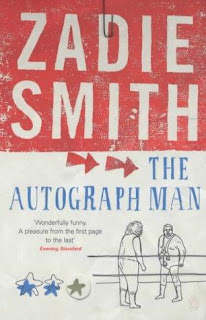 In reviewing Smith’s second book, I don’t want to join the anti-Zadie bandwagon post publication of White Teeth. There was great hoopla when she published White Teeth (a truly wonderful book) in 2000 and her first published effort which met with incredible acclaim for one so young and so new to the scene.

There was a little bit of overstated blather about her in the media, I suspect, not because she wasn’t enormously talented but because she was so young, she was so brown, so pretty (and therefore un-author-like), bi-racial, highly educated and articulate.

I always think in these scenarios that there is a little bit of Dr. Johnson’s response to the viewing of a talking dog at work here when I read the accolades being heaped upon her: "the wonder is not that it was done well but that it was done at all" which astounds the reading public.

When this second book came out there was the inevitable letdown in the literary community – it wasn’t as accomplished as White Teeth. Would she prove a one hit wonder, etc…? Who could live up to all that hype? And she was so gracious about the praise about her talent and physical beauty.

Whenever I dislike work by a writer I admire and can't articulate why I search for an explanation by a better writer - am I jealous? am I too simple to "get" it? am I too harsh in my assessment? But I think I found in James Wood's well known review for the London Review of Books a pretty good summation for what I could not articulate: it feels inauthentic, it is painfully unfunny, and the main character Alex is vacant, boring character devoid of depth engaged in a sad and superficial profession - the buying and trading of autographs.

This book feels so sophomoric and undisciplined in its prose next to White Teeth that one has to wonder if it was written well before White Teeth, it feels so much like a first effort. Did her agent and publisher push her to produce something right after the success of the first book?

Alex Li-Tandem, our 27 year old hero, is a half Chinese, half Jewish autograph hound who buys and trades for money. The book is an odd and not terribly interesting combination of pop culture, movie trivia and musings about the Kabbalah, Zen and Jewishness vs. goyishness. Unfortunately none of these topics engaged me much. Alex, as you can imagine, is surrounded by fellow nerdy “Autograph Men” like Dove, Duchamp and Lovelear with whom he travels to conventions and trades and buys product.

His chief obsession in life is obtaining the autograph of a fictitious beauty, the 40s film actress Kitty Alexander of Russian/Italian descent who seems to be combination of Louise Brooks and Greta Garbo. She lives in America, now a recluse, and has never responded to Alex’s requests over thirteen years for an autograph. One day he receives the autograph by mail but cannot fathom why or how after so many years. His friends are convinced that he fabricated it himself and he is going mad.

Wood's observation rings too true that this is one of those ...
"... novels in which the leading characters are human Cray computers of arcane trivial facts, in which people quote Casablanca to each other, or start conversations with challenges like ‘name three vintage Hollywood decapitations’, or go on about Kitty Alexander and Lauren Bacall, are now coming to seem dismally familiar. We have had High Fidelity, and White Noise, and Quentin Tarantino, and The Sopranos, and Fury, and by now we get the idea that we are poor sops in the society of spectacle, and that everyone under fifty speaks in consumer clichés and TV tags. It may be time to retire this little observation."

On a trip to New York for a memorabilia convention, Alex is determined to meet Kitty Alexander and inadvertently enlists the aid of a Divine Brown like figure (yes like the Divine Brown who got entangled with actor Hugh Grant back in the 90s) named Honey Smith who is, get this, part-time prostitute, part-time memorabilia collector and trader. Why she would be interested in a geek like Alex is never really explained. I think that Honey is likely meant to be a metaphor for the seedier side of fame and notoriety.

Of course, Alex finds Kitty fairly quickly in NYC despite a few petty obstacles and in such an improbable manner. Of course, she absolutely loves him upon meeting him and reveals why she has not written before. It’s such a silly, contrived plot. And it makes no sense at all …

Honey’s interest in Alex, her interest in memorabilia, her interest in helping him find Kitty Alexander, Kitty’s ecstatic swooning over Alex’s letters which have been kept from her all along ... sister please. Alex's fascination with Alexander is understandable but unconvincing to me even as one who has a similar sort of fetishistic interest in silent film actress Louise Brooks. And why the beautiful Esther back in England (sister of best friend Adam) would be involved with Alex is a stretch as well … nerdy, neurotic, unreliable Alex who constantly disappoints her?

Not terribly interesting writing tics appear throughout the book such as references to characters making the “international gesture for …” fill in the blank – wonder, boredom, disbelief, anger, etc … bits of arcane movie trivia, pieces of the Kabbalah as interpreted by Alex’s more devout Jewish friends. Each chapter heading contains a tiny, vaguely comical synopsis of the chapter which is meant to telegraph all the funny bits.

Perhaps we are meant to think that Alex is redeemed from his mediocre, superficial life by what he tries to do for Kitty Alexander at the end or by his final token of respect for his deceased father Li-Jin by attending his Yahrzeit which he has resisted throughout the novel for some inexplicable reason. In my view, he is not redeemed.

My advice: skip this book and pick up White Teeth. Let’s wait for Smith to fulfill her bountiful promise as exemplified by the first book.
Posted by A Lit Chick at 9:11 AM