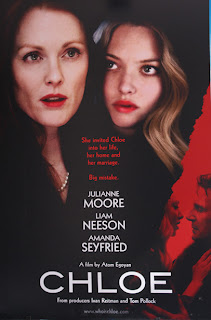 Maybe I'm a bit tired or unduly irritated by the fact that every single film I have attended I have sat beside or behind someone using their Iphone or Blackberry during the film ... or maybe the latest offerings from two of my fave living directors (Egoyan and Soderbergh) that I saw today were not up to snuff.

Today I saw Egoyan's Chloe, an adaptation of the French thriller Nathalie (2003), and have mixed feelings about it. It is best described as an eroto-thriller with a "Fatal Attraction" sort of twist to the ending which I won't reveal. Certainly this is Egoyan's most commercial venture in some time.

Maybe I am tired or maybe I am just ... not ... a ... nice ... person but every time I hear Egoyan speak I am reminded of the dorkiest, brightest kid in the class who is trying to impress the teacher. I can't help it!! And I really do enjoy his work and respect him as an artist.

Dr. Catherine Stewart (Julianne Moore), an OB/GYN doctor, is married to David Stewart (Liam Neeson), a handsome music professor, who has a roving eye and a flirtatious manner. When David deliberately misses a birthday party planned for him by Catherine, her suspicions are aroused about his fidelity.

Catherine meets Chloe (Amanda Seyfried), a pretty young prostitute to whom she extends a kindness during an emotional encounter with a client and whom Catherine contracts to "tempt" David to see if he remains faithful. Catherine is soon disappointed when Chloe tells her that David has begun an affair with Chloe, arranging trysts at the Windsor Arms and in the conservatory of Allan Gardens. Seyfried is convincingly cast as the needy, manipulative call girl with a mother fixation.

As much as the details repulse Catherine, they also arouse her and she finds herself falling in love with Chloe and sleeping with her. But Chloe also becomes disturbingly interested in their only son Michael (Max Theriot), a sullen, introverted teenager who appears a bit estranged from his parents.

Catherine seems desperately lonely. She lives a very separate life from David and feels that her role as a mother has dwindled away as Michael has grown up. She is also disturbed by Michael's burgeoning love and sex life. She seems to occupy neither role now: wife/sexual partner to David and mother to Michael, and suffers a great deal of anguish because of it. The loneliness is agonizing and familiar.

At one point she says to David that as he ages he becomes more beautiful while she feels that she is becoming more invisible as she ages, less attractive, less sexual. Of course, this is Julianne Moore so it doesn't quite resonate as she is still a very beautiful woman. But you understand the concept, she makes you believe her agony. It is a common belief that they (men) age handsomely, we wither away like pieces of over ripe fruit on the vine.

After Chloe sleeps with Catherine who, uncomfortably, seems a sort of mother figure for Chloe, Chloe refuses to leave her alone, business arrangement or not. I won't spoil the denouement but it is a surprise.

One final note: it's great to see how beautifully Toronto in winter is filmed. He makes it look sensuous and wonderful: Yorkville, the Windsor Arms, Queen St. West, Cafe Diplomatico (the Dip) on College St., Allan Gardens, Avenue Road, the Royal Conservatory of Music, the Rivoli restaurant ...

Minor TIFF of the Day: Egoyan said that screen writer Erin Cressida Wilson had set the film in San Francisco, her home town, but Egoyan insisted that it be set in Toronto. Wilson, married to a Canadian, happily complied.
Posted by A Lit Chick at 7:55 PM