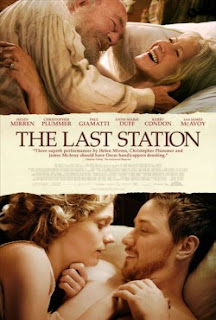 Even if this love story between the great Russian writer Leo Tolstoy and his wife Sofia were purely fanciful and not based somewhat on fact, it would still be vastly entertaining. The film was derived from Jay Parini's novel The Last Station: A Novel of Tolstoy's Last Year.

Tolstoy (Christopher Plummer) is tired of living with his wife Sofia (Helen Mirren) who, although still beautiful after a married life of almost fifty years, is volatile and wilful (and quite possibly mad).

Even if Sofia is uncontrollable and petulant (she breaks dishes in a rage, insults Tolstoy and his Tolstoyan colleagues, refuses to countenance Tolstoy's own wishes to bequeath the copyright of his work to the Russian people), our sympathy still resides with her rather than his insipid followers - the dimwitted Tolstoyans, their scheming daughter Alexandra Tolsoy and the obsequious doctor who trails him, writing down all his words as if he were a religious prophet (which many of them believe him to be).

The Tolstoyans are lead by Vladimir Chertkov (the approrpriately slithery Paul Giamatti) whom Tolstoy embraces and praises like a son. The Tolsotyans are described as such:


Tolstoy's views were formed by rigorous study of the Gospel teachings of Jesus Christ, particularly, The Sermon on the Mount. They self-identify as Christians ... They do not participate in, or concern themselves with, governmental and worldly affairs, which the Tolstoyans considered as immoral and corrupt. Thus, they may be technically described as anarchists, though not all of them claimed that title. Many now regard them as Christian anarchists because they recognize God as their only authority.

Oh yes, and they are avowed celibates.

In counterpoint to the severity of the Tolsoyans we have two young lovers Valentin Bulgakov (James McAvoy - who happily resides in my memory as the much maligned working class hero in Atonement), Tolstoy's personal secretary - and Masha (Kerry Condon), a worker in the compound, who are enmeshed in the movement, living in the same rarefied community but with strong, hitherto unvoiced doubts about whether they are embracing the right course.

They are all, in a way, fighting for Tolstoy's soul and for control of his legacy.

Eventually Tolstoy wearies of Sofia and of the inability to find peace to work and under cover of the night he escapes with daughter Alexandra (Anne Marie Duff), his doctor and Chertkov only to be stranded at a railway station when he falls ill. Sofia pursues him (Orthodox priest in tow) but she is not permitted to see her husband as the Russian media gathers around the station waiting for the grand denouement. It will be the final time the couple meets.

For me it seems a metaphor for the power of love versus the power of inflexible absolutes of doctrinaire politics. Not even the saintly Tolstoy can resist Sofia and all her considerable charms. Mirren is wonderful - even at her most impetuous, annoying moments - when we compare her to the austere sycophants that follow Tolstoy about. "You all think he's Christ, don't you?" she taunts his followers. She appears to be the only one who does not and treats him accordingly.

And the long-time marraige rings true due to the artistry of Plummer and Mirren - petty fights, sexual passion, intellectual compatibility, arguments about money and friends and ideas - all the hallmarks of a strong if tumultuous marriage. Except Leo feels he cannot abide her any longer. He is old and sick and beleaguered with the desire to leave something lasting even if it means destroying a financial legacy for his children which is what Sofia objects to.

Sofia, over the top, impetuous and sometimes cruel, we are on your side.
Posted by A Lit Chick at 8:53 AM