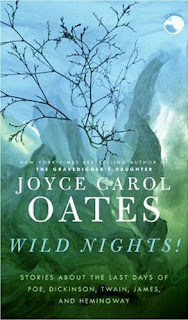 Perhaps it is true, as a critic once said, that we undervalue Oates as a writer because she is so prolific. Since 1966 she has published at least twenty collections of short stories such as this one and this does not account for the full length novels and other works of non-fiction. I know that I have not read her work in many years even though I heard her give a talk in New York a number of years ago and was greatly impressed with her.

Wild Nights! (the title is from an Emily Dickinson poem) caught my eye because it was fiction about the last days of five writers/poets: Edgar Allen Poe, Emily Dickinson, Mark Twain, Henry James and Ernest Hemingway, the last two I have a special interest in.

The power of her imagination intrigues me and makes me green with envy as a writer.

These stories are totally different for each writer. It’s not their last words before death, as I imagined, but engaging scenarios which are difficult to describe.

The reader generally fares better with the collection if you know a little of the writer's life. The least engaging is “Poe, Posthumous; or, The Lighthouse”. Edgar Allan Poe, the story not the writer, left me mystified.

The most original and engaging is the second one on the poet Emily Dickinson. Quietly subversive, “EDickinsonRepliLuxe”, is set in some vaguely futuristic scenario, where a middle aged, prosperous, suburban couple named the Krims shop for an automated robot-like figure of a famous artist that they may keep at home almost as a “pet”. The RepliLuxe is smaller than life size but exact in its representation and dress and is programmed to respond in a manner similar to the original artist.

The wife, an aspiring poet, seeks companionship and perhaps mentorship from an unresponsive Dickinson. The husband, resentful at first, wants something entirely different. Both are disappointed but their enterprise leads to a surprising conclusion for both forcing the wife to choose art over husband.

In “Grandpa Clemens and Angelfish, 1906”, Oates bravely tackles Mark Twain’s attraction to young girls whom he famously called his “Angelfish”. He had a reputation for cultivating young female admirers. Yet it is delicately and convincingly handled, eliminating the “ick” factor but presenting both the mindsets of Twain and his resentful, unhappy daughter convincingly. This is tricky territory for a woman and a writer.

But Oates is absolutely fearless. This is the woman who tackled a fictional narrative from the perspective of a Jeffrey Dahmer like murderer in the book Zombie not long after Dahmer was arrested.

“The Master at St. Bartholomew’s Hospital, 1914-16” is a fictional excursion into Henry James' volunteering during WWI at a hospital for wounded soldiers in England. I remember reading that he was devastated by the war and guilt-ridden that he was unable to do more. At this time he officially applied for British citizenship after decades of living in England. Oates handles his closeted homosexuality delicately - imagining his last days volunteering in the hospital as a way of channeling both his patriotic ardor and his attraction to men.

“Papa at Ketchum, 1961”: the most difficult to read, the most graphic in detail because Ernest Hemingway was a suicide and suffered from what is now referred to as bi-polar disorder. Real or fictitious in its representation, she seems to capture the enormous ego of the man, his misogyny, his great talent, his desperate attempt to maintain his "manliness" at whatever cost.

It always intrigues me to think that much of what a man may do too prove his masculinity rests upon proving that he has obliterated any "feminine" qualities. It seems to rest on the denigration of the female. Conquest and seduction of women demonstrates manliness.

The prose style is eloquent but repetitive in phrasing suggesting a talented mind in torment, an intelligent mind, disintegrating, unable to control its terror, its insecurities. Oates presents Hemingway as vain, harried, unnerved about his impotence, his loss of hair, the fact that he must use a cane, that he must be assisted sometimes due to poor health. The denigration of his fourth wife whom he merely refers to to as "the woman" or "that woman" or his "widow to be" is difficult to read but utterly convincing. He reduces her to a "cunt", a "harpy", a gaoler, a conspirator with the FBI set out to destroy him because of his political beliefs.

I bow to Oates' creative gifts ... they remain unabated these 40 odd years.
Posted by A Lit Chick at 8:39 AM