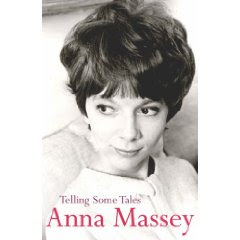 Anna Massey is a respected British theatre and film actress with a long career stretching back to the 1940s. But my interest in her comes from her Canadian roots. Finding this book was like the proverbial light bulb going off for me as I have been doing a bit of research on the Massey family here in Canada and this has encouraged me to resume my research.

The Masseys are fascinating to me as they likely are to many other Canadians. Someone famously quipped that there were only two classes in Canada in the late 19th c.: "The Masseys and the masses".

Hart A. Massey (1823 – 1896), Anna Massey's great grandfather, was an enormously wealthy industrialist who was the founder of the farm equipment company that became Massey-Harris (now Varity). He built a formidable empire 150 years ago which has pretty much slipped away from the Massey family today.

Later in life, faced with the early deaths of two sons he became a major philanthropist in Toronto. His substantial legacy for the city was financing the building of Massey Hall, a concert hall; the Fred Victor Mission (named for his youngest son), an institution for the homeless; and, the Hart House building for students at the University of Toronto.

Raymond Massey (1896 – 1983), Anna's father, was the Canadian actor whose claim to fame was his roles as Abraham Lincoln in American film and, perhaps more famously, his role in TV's Dr. Kildare series. Adrianne Allen (1907 - 1993), her British born mother and Raymond's second wife, was a respected theatre actress and socialite who consorted with all the great show biz and literary names of her time.

So Ms. Anna, now 71, has a theatre pedigree oozing out of her pores. Now she has written a book, detailing her film and theatre work and the parade of famous people that she has met during the course of a very full and eventful life. But perhaps because Massey met so many of these people in her youth, the anecdotes sometimes appear insubstantial. Somehow I expected more but perhaps this is an unfair expectation.

She talks a great about her craft which is fascinating and the numerous roles she has played, all varied, substantial and interesting to be sure.

Photographed by Cecil Beaton and Richard Avedon, she seems dwarfed by these personalities. Directed by Hitchcock and working with, or rubbing shoulders with, cinematic or literary giants such as Stanley Kubrick, T.S. Eliot, John Gielgud, Ralph Richardson and, through her mother and father, consorting with Noel Coward, Moss Hart, Taylor and Burton, Judy Garland, Dorothy Parker and Gregory Peck, the reader is a little overwhelmed by the range and magnitude of these personalities.

I wish she had provided more detail, more background, but perhaps these encounters were as fleeting as they are presented in this memoir.

But it is crammed full of other mildly titillating and self-disparaging anecdotes: her cold, withholding father Raymond, from whom she was estranged most of her life, sent Anna $25 for her birthday every age regardless of her age or financial status.

Uncle Vincent, wishing to impress his house guest Prince Philip in Canada, requests that his now famous niece travel from England to entertain him but balks at paying her airfare.

Husband Jeremy Brett was a closeted homosexual for years, subjecting both himself and Anna to years of unhappiness.

Roger Corman asked her to appear topless in a scene (how unlikely!).
One recurring theme annoyed me: Massey's persistent passive aggressive criticism of women who are more glamorous than she is. And they are legion ... her mother (often the recipient of sly, deprecating remarks) with her garish clothes and flamboyant decorating style, "pounds" of make-up on Judy Garland, Katherine Hepburn's blotchy skin, etc ... those sorts of remarks inserted after gracious compliments about a woman's talent or beauty. Little Miss Anna of course favours the natural look.
With mummy gone, all the old angers and bitterness that were repressed surface here. She was not maternal, she was not physically affectionate, she sometimes embarrassed her daughter with her flamboyance. This rankles me as a mother obviously. A little respect for the old gal please

Try and be more like my 12 year old, I would advise writers of memoirs, who tells the old lady (as in me) exactly when she is embarrassing her that way I won't be turning in my grave when J writes her memoirs.
Posted by A Lit Chick at 8:35 AM