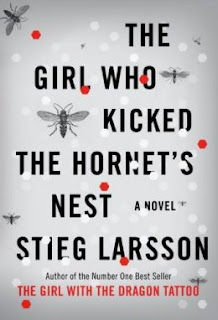 "When it comes down to it, this story is not primarily about spies and secret government agencies; it's about violence against women, and the men who enable it."

The Girl Who Kicked the Hornet's Nest by Stieg Larrson (Penguin Group, 2009) 563 pages

Larrson brilliantly conceived Lisbeth Salander, the heroine of this trilogy, as a sort of feminist avenging angel/superhero who taps into many female revenge fantasies about punishing and destroying those who have inflicted violence on them.

But cleverly for Larrson's male demographic, the physical aspects of Lisbeth engage the male libido as well - a waif-like, undersized dynamo who conveniently gets breast implants in book 2. Visually she is something straight out of a comic book catering to teenage boys: phenomenal physical powers, busty and an appealing anti-social mean streak manifesting itself in kicking ass whenever she is mightily pissed off (which is often).

The third book of the Millennium trilogy begins where the second left off: Lisbeth Salander has been shot in the head, buried and has survived rescued by the crusading journalist and middle-aged babe magnet Mikael Blomquist. Zalachenko, a former Russian spy who is also her father, has also survived being attacked by Salander with an axe ... okay, it's absurd but it wouldn't be a story without our heroine Salander and Zalachenko is the perfect villain here.

As a young girl, Salander was targeted by the Säkerhetspolisen (abbreviated to Säpo) or the Swedish Security Service, and locked her away in a psychiatric hospital to protect Zalachenko's secret identity - a brutal wife beater whose abuse landed his wife in an institution with brain damage. A Dr. Peter Teleborian, working with government forces, faked a disturbing psychiatric report which permitted the authorities to lock up and repeatedly restrain the twelve year old Salander and... she ain't very happy about it.

As Salander recovers from her attack in hospital, Blomquist works feverishly to avenge Salander by researching the workings of the Säpo. Government forces are determined to shut Zalachenko up. Zalachenko still seeks revenge against his daughter. Neidermann, the hulking menace who serves as Zalachenko's assistant (and who is also his son and Salander's half-brother), is still free...Salander is clearly in jeopardy.

Whomever, or whatever, had decided to destroy Salander isn't quite finished: they tap Blomquist's phone and have him followed; attack Annika Gianinni, Salander's lawyer; steal a secret report on Salander; and try to eliminate Zalachenko when he threatens to talk.

A good portion of the middle section of the book is devoted to Blomquist's attempts to unravel this tangled web within the government and, frankly, Larsson almost loses us as readers here. The Swedish names (Larsson refers to characters usually by their last names - male and female) and the long list of characters and convoluted  plot sometime make for confusing reading. In my mind I was trying to distinguish Niedermann, Salander's half brother, from Nieminen, another particularly evil bad guy or trying to keep straight the names of Ekström (lead prosecutor in Salander's trial) from Edklinth (director of Constitutional Protection at Säpo). Then there is Anders Jonasson, Salander's doctor, but also Jonas Sandberg, one of the bad guys. Admittedly, it is a challenge...

But about 150 pages from the end things start to pick up again as Lisbeth plots her revenge firstly from her hospital bed and then from prison awaiting trial after being charged with trying to kill Zalachenko (among other things).

Larsson writes with enthusiasm about the mythical Amazons - inserting snippets of their history, real or imagined in between chapters - and clearly he is fascinated with the image of the physically powerful female avenger represented by Salander.

He undercuts the potential threat of Salander's image by making her small, "doll-like", frail looking, her dangerousness is always underestimated by the men she encounters...yet she is able to outwit and overpower men many times larger than she is. Larrson has tapped into a very powerful undercurrent in the female psyche. We, too, are fascinated as readers.

How satisfying is it when Susanne Linder, another powerful female and the Milton security operative in the book who guards over the editor Erika Berger, brutalizes Erika's stalker? I confess, I enjoyed a disturbing frisson of pleasure in observing him being rendered powerless and humiliated.

Or similarly, in another scene, Monica Figuerola, an operative at Constitutional Protection and Blomkvist's sometime lover, comes in at the last moment and saves Blomquist from the bad guys in a pivotal scene, guns ablazing ...

The thing that does perturb me about the series is that we can't seem to be introduced to a female character without an element of danger or sexual threat surrounding her: there is the obvious example of Lisbeth who represents this idea in its most extreme form with her history of sexual and physical abuse. Annika Gianinni, Lisbeth's lawyer and Mikael's sister, is physically attacked because she possesses some valuable information about Lisbeth; Erika Berger, the Millenium/SMP editor and Mikael's sometime lover, is stalked and harassed with sexually explicit insults by e-mail and messages strewn about her home; Miriam Wu, Lisbeth's lover, is assaulted and nearly killed in an earlier book; Lisbeth's mother is beaten so badly by Zalachenko that she is brain-damaged and ends up in an institution. And there is the initial mystery surrounding the allegedly murdered, missing Harriet Vanger in book 1.

You know, if you are a reader of the past two books, that Salander must have her revenge: will she wreak havoc on Teleborian the psychiatrist who institutionalized her? On her half-brother Niedermann who tried to kill her at her father's behest? On one of the government operatives who helped set her up? It's a graphic and violent denouement but we expect no less from Salander (and Larsson) here.

If you focus on the obvious flaws in the plot you won't be able to buy into the whole...Why would they leave two patients - each of whom are alleged to have tried to kill each other (one has a bullet in her brain, the other was attacked with an axe) virtually side by side in the hospital unprotected? They are the objects of intense media, government and police scrutiny and they have no one to protect them? How can Salander recover so quickly (intellectually, physically) from the wound in her head and mastermind the violent and satisfying demise of her enemies?

Why do the authorities keep claiming that Salander is basically mentally challenged, or deranged, when she has held a job for years with Milton Security and worked with Blomquist as a researcher in book 1? Would not the testimony of her employers refute this bizarre categorization? Is it merely because she rarely speaks and is anti-social? Is it because she has piercings and tattoos?

There are a few intriguing loose ends which suggest that more was to come before Larsson's untimely death in 2005: for instance, what becomes of Lisbeth's sister whom we hear of but never see?

The translator's haphazard English still slips through as when Berger threatens that she will "get rid of dead meat and recruit new blood" at her new newspaper. Other small instances abound.

But the immense draw is Salander who is an almost omnipotent enemy - phenomenally talented as a computer hacker, able to outwit and kill the greatest foe - all contained in a 100 pounds of pure fury. If you are going to enjoy the series, one must simply let go and go with the fantasy...
Posted by A Lit Chick at 8:27 AM