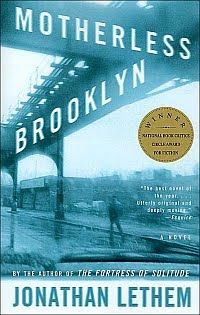 This is a very tough path to follow as a fiction writer...trying to replicate and document a narrator with a serious medical condition like Tourette Syndrome. In this instance, Lethem's protagonist Lionel Essrog is a "detective" (I will explain my quotation marks in a moment) with the condition. He says on page one: "If I was a Dick Tracy villain, I'd have to be Mumbles..."

Lethem treads a fine line between making Essrog believable and sympathetic and being annoying on the page. I have to say that R, my husband, felt more of the latter than the former when he read this book sometime ago. The verbal tics do begin to grate ... as a reader we need enough detail for it to be believable as a condition but not distracting to the reader.

All the classic noir elements are here: an unexplained murder (Frank Minna); a mysterious, beautiful woman - preferably a widow (Julia Minna); the stooge who is trying to kill our hero for some unknown reason (the "Polish giant"); a flawed but ultimately virtuous detective (Lionel Essrog) trying to solve the case...yet it never comes together for me as a plot.

Whether Lethem is able to capture the interior monologue of someone with Tourette's, I can't say. He certainly captures the outer mannerisms - the compulsive touching, the expletives and outbursts of seemingly nonsensical chatter. I once had a friend with Tourette Syndrome and this describes S's behavior very accurately. S did a bit of acting too and could be seen in the opening scene of the 1990 film Awakenings with Robin Williams. I remember that Williams even mentioned S in promotional interviews about the film.

Minna is foul mouthed and abusive but loving with the boys in his own fashion - paying them somewhat generously and feeding them on occasion at his mother Carlotta's home, alternately offering advice and verbal abuse to the boys. Frank's favorite term of endearment for Lionel is "freak show".

The Minna boys start with seemingly low level tasks ... moving stolen equipment, guarding a car that they presume contains a dead body in the trunk, and eventually the group slowly evolves into a band of "detectives" primarily servicing two clients - the wealthy and mysterious Rockaforte and Matricardi. Are they relations? Lovers? Criminal conspirators? It's hard to tell. 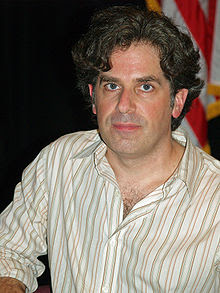 Essrog and his fellow orphans, jokingly referred to as "motherless Brooklyn" by Frank's brother Gerrard were closely tailing Minna on a job the day of his murder, at his orders, only to find Minna after a frantic chase, deposited in a dumpster, fatally stabbed by an unknown assailant - possibly by "Ullman", possibly the "Polish giant". Although conscious when found, Minna refuses to reveal who the killer is and soon dies.

The four Minna Men are horrified and bereft as the profane Minna represented the lone father figure in their lives, whom they both seek to emulate and revere. With Minna's wife Julia purposefully disappearing, the men take on the task of solving the murder.

Tony, now the defacto leader of the four, is acting oddly. Gilbert is arrested for the murder of yet to be seen Ullman (even though it is clear he is not Ullman's murderer) and Danny withdraws into a sullen silence. Someone, it appears, is picking off the Minna Men ...

Lionel returns to the scene that Minna was venturing into when ambushed and killed - the unlikely location of the Zendo, a meditation hall for Buddhists in Brooklyn. Is this a sly commentary on modern Brooklyn? Never mind the flop houses, speakeasies and brothels of film noir and old detective yarns, Minna meets his demise by someone affiliated with this place of cushioned Zen silences?
Lionel meets Kimmery, a lowly Buddhist practitioner tasked with sweeping up the joint and is instantly smitten. He thinks she has a calming effect on this tics and she is seemingly unfazed by his "eccentricities". Later he is menaced by four hapless doormen in suits who throw him into a car and seem more afraid of him than he is of them ... why?

Soon summoned by Rockaforte and Matricardi and asked to abandon his quest to find Minna's killer on his own and align himself with Tony, Lionel becomes suspicious - is Tony behind Minna's murder? Did he sleep with Julia? Why do the two men want him to pursue this course?

Two thirds into the novel the story devolves into some intricate plot involving members of the Zendo who appear to assume multiple identities and are complicit in the murder of Minna. Pseudo Japanese monks, Brooklyn mobsters, estranged brothers ... the plot is convoluted and not particularly believable.

I like my noir straight...and adding these seemingly modern twists to the plot only bore or annoy me. For some old school, mid century noir try David Goodis - short, sweet and nasty.

I would like to be more sympathetic to Lionel and his fate but found myself very disengaged from the plot and, frankly, bored. What is wrong with this character - not wrong but unappealing? He lacks the heroic dimension, the sexiness of the classic "dick". It's not really the Tourettes - it's the goofiness, a fondness for sandwiches and food in general? An attraction to Buddhism? Where is the cynicism, danger, flawed humanity, which makes these characters appealing? Lionel has zero charisma.

I should have paid heed to the husband. Once in a while, I would say, he is absolutely right!
Posted by A Lit Chick at 8:15 AM

Pseudo japanese monks? That sounds just silly. Well I guess they can't all be gems, but there is nothing more disappointing than a book that is "meh".

Lionel's charisma may be lacking, but do his detective skills work in the rain?

But seriously folks--I think manuscripts like this are better in concept than execution. The mental illness is rarely more than a gimmick. The only exception (that I've read) is The Stone Angel, assuming senility counts in this case.

Aaahh, always our Chris being Chris ....

Yes, you have crystallized my thoughts - gimmicky. The writer's fingerprints are all over the character (unnecessarily) ... never for a moment do I forget he is a fictional character with an elaborately constructed persona. No matter how clever the writer, at some point you need to let go of the little clever bits and let the character become something flesh and blood ....