Brando for the Summer 5 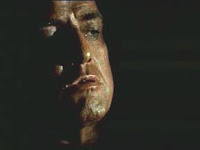 Brando does not appear until almost two hours into Apocalypse Now (1979) (1 hour 54 minutes to be exact) and even then he is shrouded in darkness. The story goes that when Brando appeared on set, Francis Ford Coppola was "horrified" by how much weight he had gained at 300 pounds and decided to shoot him in darkness in many of the scenes. This anecdote, if true, proved a brilliant move because it enhanced the mystery and power of the fictional character Colonel Walter Kurtz that Brando portrayed.
In both the film and the novella Heart of Darkness by Joseph Conrad on which the film is loosely based, Kurtz is described by writer Patrick Galloway as "a company man turned savage ... a brilliant and successful team-player, being groomed by "the Company" for greater things, suddenly gone native". In the book, Marlowe must track down Kurtz, a colonial administrator "gone native" in the heart of the Congo; in the film, Willard (Martin Sheen) must find and kill Kurtz (Marlon Brando), a Special Forces operative, member of an elite squad, gone terribly astray in Cambodia during the Vietnam war. Accused of "illegally" killing several Cambodians and disobeying orders, the powers that be decide that he must be terminated.

Much of the spectacular footage in the film surrounds Willard's voyage by boat through Vietnam and into Cambodia where the U.S. denies it has a presence. He encounters a frightening tableau of madness, drugs and violence. A Colonel Kilgore (Robert Duvall) invades and attacks a seemingly peaceful hamlet in Vietnam so that a renowned surfer, Lance Johnson (Sam Bottoms), may surf in a desolated area to a deafening recording of Wagner's Flight of the Valkyrie and utters the famous lines: "You smell that? Do you smell that? Napalm, son. Nothing else in the world smells like that. I love the smell of napalm in the morning."

The men enter combat zones where the GIs are strung out, violent and seemingly without a commanding officer; GIs take Ecstasy; innocent villagers are slaughtered. Stranded men plead to be taken aboard and are left behind. Willard kills a wounded woman so that his mission is not jeopardized.

Slowly the men accompanying Willard are killed off by mishap or violence and Willard makes his way to Kurtz who has created a pagan empire of his own where he is the supreme ruler. Willard is met by Dennis Hopper, a strung out, unnamed hippie/photographer who appears to act as a spokesman for Kurtz. Violated bodies, presumably of those who have defied Kurtz, swing from trees like perverse fruit, skulls adorn the landscape and the native population, which is comprised of Cambodians, Kurtz' offspring with the native women and GIs gone AWOL, appear to worship him and follow all his commands in near somnambulistic states.

Willard is granted an audience with Kurtz where he finds an imposing figure half hidden in the shadows. Slowly prowling the parameters of his inner sanctum he questions Willard and asks why he has been sent to kill Kurtz. Willard says, "I was sent on a classified mission, sir." Kurtz replies contemptuously, "You're an errand boy, sent by grocery clerks to collect the bill." Here, Brando's physical presence works to advantage for he intimidates both Willard and the viewer. His combination of civilized hauteur and a quietly threatening demeanor compel the viewer.

Willard is imprisoned and after an interminable period trapped in cage, he is presented with the severed head of Chef (Frederic Forrest), one of the men had him to Kurtz. The next day Colonel Kurtz reads to Willard from T. S. Eliot's poem The Hollow Men (filmsite.org notes that the poem was inspired by Heart of Darkness) and the camera pans across the books that Kurtz is reading: the Bible, From Ritual to Romance and The Golden Bough.

Brando portrays Kurtz as a sort of wounded, brooding poet/warrior who feels compelled to commit acts of violence and refuses to be condemned for his actions. Against his will, Willard becomes the repository of Kurtz's conflicted feelings of horror and righteousness in his actions. Kurtz tells him, "I've seen the horrors, horrors that you've seen. But you have no right to call me a murderer. You have a right to kill me - you have a right to do that - but you have no right to judge me."

In a moving monologue, Kurtz recalls a pivotal moment from his Special Forces days when some South Vietnamese children were inoculated against polio. In a vicious act of revenge, Vietcong guerrillas came into the village and hacked off the left arms of the inoculated children. Despite his anguish, Kurtz admires the actions of the men who acted "without judgment" acknowledging that that is what he seeks in his constructed paradise, men who will act without judgment and hence end the war quickly. This seems to cement Willard's resolve to kill Kurtz as if he is receiving tacit approval from Kurtz to do what he must do.

During a sacrificial ceremony where a caribou is to be killed, Willard struggles inwardly to compel himself to act: "They were going to make me a Major for this and I wasn't even in their fuckin' army any more. Everybody wanted me to do it. Him most of all. I felt like he was up there, waiting for me to take the pain away. He just wanted to go out like a soldier, standing up. Not like some poor, wasted, rag-assed renegade. Even the jungle wanted him dead, and that's who he really took his orders from anyway."

He slays Kurtz with a machete just as the caribou is ritualistically slain by Kurtz's "people". Kurtz seems to sanction his own sacrifice whispering, "The horror. The horror." as he dies, uttering the last words of Heart of Darkness. As Willard leaves the slain Kurtz, the cowed villagers bow to their new "leader" and lay down their arms. Willard betrays a momentary hesitancy as if he is contemplating replacing Kurtz then abruptly changes his mind. Willard leaves, leading Lance, the stoned surfer seduced by Kurtz's "paradise" and the last man living who was on his mission, to the patrol boat so that they may escape.

As I think of what Brando brings to the five roles discussed in these last five blogs, immediately I think of that now politically incorrect word "primitive". He seems to reach into himself and tap into a sort of man that many would find reprehensible but who represents a certain male psyche: dominant, ruthless, aggressive.

The brutal, insensitive Stanley Kowalksi in Streetcar Named Desire, the boxer turned petty criminal Terry Malloy in On the Waterfront, the ruthless Don Vito Corleone in The Godfather, the emotionally disturbed, volatile Paul in Last Tango in Paris and the wounded warrior Colonel Kurtz in Apocalypse Now. But the roles are always coupled with something else: a vulnerability, a shame in his "primitive" nature, a reflectiveness about why he has become what he has become.

His willingness to expose the ugliness and violence of the characters made him a brave actor. That he layered these roles with complex emotions and vulnerability made him great one.
Posted by A Lit Chick at 10:35 PM