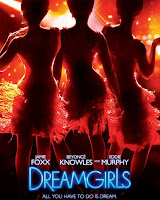 My sistah T (one of my "outlaws") lent me some DVDs which I missed this year and last and have been meaning to see for sometime. This is one of them ...

I remember clearly when my brother and I went through our Motown phase. We obsessively listened to a three disc set of the Supremes in the 70s, memorizing the lyrics, miming the actions, generally making fools of ourselves as only white folk can do when listening to black music (okay, so maybe that was just me)... so I do get it - the story of the Supremes is intriguing, a quintessential American rags to riches success story.

The story is well known and I think there is no need to reiterate the entire plot except in its most basic form. The film is a semi-fictitious version of the life of Diana Ross and the Supremes (here renamed The Dreams) and their rise to fame under the mentorship of Berry Gordy Jr., founder/owner of Motown Records in Detroit. There are a number of idealistic twists along the way typical of American success stories. That things did not end well for all concerned doesn't really fit into this fantasy paradigm.

Regrettably, the film has achieved the somewhat inconceivable: Bill Condon has managed to create an utterly boring cinematic vision of a dynamic group of black entertainers in one of the most crucial periods in black American music history.

Oh yes, it looks beautiful and the costumes, wigs and various scenarios where the Dreams appear are picture perfect but it utterly lacks depth. The music is uniformly awful, generic sounding and soulless, literally. Not for one minute do you believe these three girls grew up poor, or how much music meant to them as a way out of that life or sense the hunger that must have driven Berry to the sometimes malicious and criminal ends he resorted to to promote the careers of the Supremes and push a black pop group into mainstream American culture.

Here the Supreme group members Diana Ross have morphed into Deena (Beyonce Knowles), Florence Ballard into Effie (the famously rejected American Idol participant Jennifer Hudson) and Mary Wilson into Lorrell (Anika Noni Rose). The girls grew up in a time when black was not beautiful, where nappy hair had to be hidden by synthetic wigs. Black entertainers were still not welcome in certain establishments. Berry exploded on to the mainstream music scene destroying the colour bar forever on radio and musical venues.

Here Deena, Effie and Lorrell are taken under the wing of Berry-like music entrepreneur Curtis Taylor, Jr., (Jamie Foxx), owner of a car dealership and wannabe producer. Taylor is brilliant at spotting talent, cultivating it and pushing the group forward into the pop sensations they will eventually become. However, he is equally ruthless at eliminating all obstacles in the way. When Effie becomes a liability because she is too difficult, too heavy for the pop image that he is cultivating for the girls, he takes Deena as his lover and forces Effie into the sidelines as a backup singer even though she has the strongest voice.

Effie quits and lives nobly in poverty, giving birth to Taylor's child and never disclosing the father's identity. She struggles on, trying to re-establish her own career, is cheated out of a comeback by Taylor only to be resurrected by the saintly Deena who is horrified to learn what Taylor has done. Effie is reunited with the Dreams by a gracious Deena for a triumphant last song in the film during which Taylor slowly realizes that the little girl in the audience watching Efiie ... is .. gasp ... own child! Brother please. He (Jamie Foxx the actor) is much better than this material. He was, much to my surprise, superb in Collateral (2004).

Nothing feels authentic here. Knowles, despite her beauty and amazing voice, is what you would imagine: only passable as an actress. Foxx is compelling I admit. Eddie Murphy as James Thunder Early (perhaps representing an amalgamation of James Brown and other soul singers of the time) is unwatchable in his coarseness and vulgarity trying to represent, I think, what a badass this type of trail blazing singer probably was at the time. No wonder the critics raved about Jennifer Hudson - she is one the shining spot in the whole film. She is passionate. angry, volatile, real. You believe that she is Effie.

In real life Florence Ballard, the founder of the Primettes, which later became the Supremes, was fired from the group in 1967 over conflicts with Berry Gordy and Diana Ross (who had since become Berry's lover). She ended up on welfare and was attempting a comeback when she died in 1976 from heart problems.

Mainstream American filmmaking, which is obsessed with happy endings, can't seem to deal with the awfulness of this truth.

But you know, maybe the black community needs these cinematic fantasies too where the good guy triumphs and the villain is punished. Too bad that isn't the way life works.
Posted by A Lit Chick at 10:15 AM