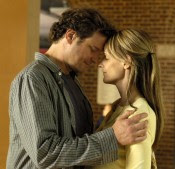 This film certainly hits on some topical issues: adoption, discovering one's birth mother and perhaps not being pleased with what you find out; the infertility medical process; the desire to mother a child; the popularity of going to China for an international adoption.

April Epner (Helen Hunt) suffers a series of humiliating and painful personal episodes: her husband Ben (Matthew Broderick) of a short duration leaves her for another woman; her adoptive mother Trudy (Lynn Cohen) dies; her birth mother Bernice (Bette Midler), a minor TV celebrity, seeks her out; April finds out she is pregnant by her ex on the cusp of a new relationship with Frank (Colin Firth) a wonderful if neurotic Brit who is the father of two children who attend the school where April teaches.

At 39, April is desperate to have the child but loses it. She debates returning to her ex-husband. She undergoes fertility treatments which her affluent birth mother pays for as a sort of penance for giving up April and repeatedly lying about the circumstances. Bernice tries, somewhat obnoxiously, to insinuate herself into April's life.

Perhaps oddly, this is all meant to be comedic. But then there might be too much pathos and angst inherent in the circumstances to play it straight.

Helen Hunt, looking haggard and worn out (is this consciously so due to the rigors of April's life or is she just plain worn out from wearing two hats - director and actor?), puts in a shrill performance which impersonates as passion and emotion, perhaps a leftover from her Mad About You sitcom days.

Colin Firth, the object of many a thinking woman's desire as the inimitable Fitzwilliam Darcy, appears in yet another role as a frumpy British twit, perhaps trying to obliterate his iconic performance in Pride and Prejudice (1996) on British television which he is best remembered for.

Although I have mixed feelings about the quality of the film, I have to say that when I wasn't laughing I was crying, and I wasn't alone in this.
Posted by A Lit Chick at 8:40 PM