Death of a Red Heroine 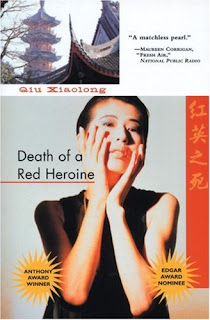 China. Murder Mystery. Communism. These four words do not usually appear together.

Set in 1990, just one year after Tianemen Square, Mr. Xialong, now living in the U.S., presents an intriguing picture of Communist China, written from the insider's viewpoint.

Shanghai born, Xialong came to the U.S. on a Ford Foundation fellowship in 1988 and stayed after Tianemen Square in 1989.

There is a good description of the book here. I approached the book reluctantly (it was a fellow book club member's choice) but I did find the Communist Chinese insider's POV intriguing. The political manipulations, the disastrous repercussions of the Cultural Revolution, the paranoia and Big Brother atmosphere of 1990s China, the dreariness of Communist life ... oh boy, I'm starting to sound like a neo-con.

Comrade Chief Inspector Chen, a 30 something police official, uncovers the murder of Guan Hongying, a young "National Model Worker", a worker celebrated for her dedication to Party principles and socialist ideals. A national celebrity featured many times in the media as a shining example of womanhood, she ends up in a canal with a belly full of caviar. Her murky double life is slowly discovered by the committed Chen.

The Chinese poetry spouting Chen, who has translated T.S. Eliot, is also a published poet, and is conflicted between a life of art and poetry and a professional life dedicated to eradicating crime. His path to solving the crime is blocked by senior party officials who seek to subvert the investigation for political reasons. The main suspect is a HCC (one of the High Cadre's Children) and thus very well protected.

The language is stilted sometimes, the phrasing awkward. I don't know if the writer is translating his work from the original Chinese or trying to replicate the rhythms of Chinese language in English. It feels very formal and does not flow to my ears.

Published in 2000, already it feels a bit dated. Or is it that life in Shanghai is so much more conservative in nature than ours? The murdered woman's sexual life is described as "perverted" (we would say perhaps kinky here - it ain't nice but it would not be considered extremely unusual here nor "perverted"). A man found babbling on the street is casually referred to as an "idiot".

Women are saintly paragons of virtue like Chen's love interest, the ambitious reporter Wang Feng, or Chen's assistant Detective Yu's wife Peiqin or ... whores (literally). There are a few of those in this book. Really - is this still where we are regarding the depiction of women? Even in 1990s China?

I don't know what to make of the ending where Chen concludes that "... a son's return for his mother's love is always inadequate, and so is one's responsibility to the country". It's almost as if he has a government censor sitting on his shoulder. Chen the maverick, Chen the one who challenges the system, appears to buckle and accept the somewhat unsatisfactory ending to the story.

The thing that always disturbed me too about conventional murder mysteries is the loving detail lavished on the female corpses. A little too detailed, a little too graphic, almost as if the writer is relishing these details. If you are looking for these deets you've come to the right place (oh and extensive details of Guan's extra-curricular activities which got her into this mess).
Posted by A Lit Chick at 9:45 AM