"Italy is only a euphemism for fate" 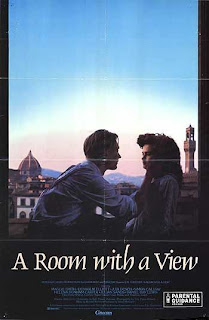 I remembered this book with delight and it seemed the perfect mid-summer reading fare. I had forgotten its casual racism despite E.M. Forster's intense love for Italy and all things Italian. It enchants while it mildly appalls at certain junctures. But I don't want to judge Forster, a turn of the 20th c. Englishman, by our politically correct 21st c. standards. The book is what it is. It is fascinating (and, again, mildly appalling) to view your own people through the lens of another people's eyes.

Twenty first century North Americans are no better in indulging in stereotypical fantasies and cliches in all forms of media whether it be the "holy Negro" of, say, the film The Green Mile or, slightly better but still cloying, the more admirable martyrs of the To Kill a Mockingbird book/film/play genre. We Westerners flip between violent stereotypes of gangsta rappers to celestial portrayals of persecuted minorities. Images of spiritual Indians (both the North American and the South Asian genus) abound. East Asians are immensely wise and stoic or ready to cut your throat at a glance in a some gangland killing. Latinos are humble peasants of the Mexican variety or vicious drug lords belonging to South American cartels destroying the youth of modern society. The greater the "otherness", the deeper and uglier the stereotype it seems. Either way a brother (or sistah) of any colour can't seem to get a break. So I will leave Mr. Forster's conflicted love of Italians alone in A Room with a View.

The 1985 film was lovely too - capturing the tone and feel of the book perfectly. Helena Bonham Carter epitomizes the sensitive, emotionally befuddled heroine Lucy Honeychurch perfectly. Her name says it all combining an endearing sweetness with a priggish, moralistic inclination to judge.

Our heroine visits Florence with her cousin cum chaperon Charlotte Bartlett (Maggie Smith) and stays at the the Pensione Bertolini (modeled on the Pension Simi in Firenze where Forster once stayed with his mother) where she encounters both Italy and her fate. They meet the irrepressible Mr. Emerson (Denholm Elliott), a vociferous socialist whom a malicious minister, a Mr. Eager who is also touring Florence, has said has killed his wife, and his slightly morose son George (Julian Sands) who generously offer to exchange rooms in the pensione, in order allow the ladies the eponymous "room with a view". They reluctantly accept somehow fearing a lack of decorum in accepting the generous offer.

Conventional but high spirited Lucy is transformed by Italy after she and George inadvertently witness a quarrel and then a murder in la Piazza della Signoria. George recognizes that something has changed immediately; Lucy is more resistant. Despite her unspoken attraction, her middle class morality dictates that George is being ungentlemanly and too forthright despite his kind efforts to shield her from the scene in the piazza. His emotional response only frightens her as does Mr. Emerson's explicit request that the by now horrified Lucy try and love George.

Yet she has been liberated by this violent scene and George's attentions. Italy liberates because ... the passions are so raw there? One is surrounded by such intense beauty, by exquisite art? Because Italians are so emotional? Reading of the perception of the "otherness" of one's people can be a bit disorienting.

In the book Italians importune and annoy the English in the churches and on the streets; fight and kill each other in public places and then the murderers kiss the victims of the homicide in an act of remorse; lie and say their girlfriends are their sisters so that they may canoodle in a horse-drawn carriage, in full view of the shocked English tourists; connive to throw the unsuspecting Lucy into the arms of the sensitive, emotionally overcome George in a field of gorgeous flowers in the Fiesole countryside. George responds accordingly, because ... he is in Italy of course. Italy has the power to unleash passions in the repressed English.

Miss Bartlett is, inevitably, shocked and alarmed that Lucy has been so "taken advantage of" and whisks her charge to Rome away from these perils and into the waiting arms of Cecil Vyse (played wonderfully by Daniel Day Lewis in the film), a snobbish prig who has set his sights on Lucy as the embodiment of womanhood: beautiful enough to be admired, young enough to be malleable to his desires and absurd viewpoints.

When Lucy returns to her home in Surrey, she becomes engaged to the cultured but controlling Cecil whom Mr Beebe (Simon Callow), the local vicar who was also in Florence at the time of Lucy's visit, has disturbingly described as 'an ideal bachelor' whom should never marry (hmm perhaps Forster's not so subtle code for gay?). Mr. Beebe serves as a sort of one man Greek chorus commenting on Lucy's emotional awakening. He hopes that one day she will live as she plays her music as a passionate pianist.

The English tourists from the Pensione Bertolini reassemble in Surrey. Through Cecil's unkind conniving the Emersons take a villa on Summer Street near Lucy's home (unbeknownst to Lucy he does so to punish the local landlord whom he calls a snob). Miss Bartlett reappears. Lucy attempts to avoid George who feels compelled to kiss Lucy whenever alone with her. Mr. Beebe witnesses all (or most) of this.

Eventually, Lucy in her befuddled way breaks with Cecil because "he would not play tennis" with her brother Freddy (Rupert Graves). Of course this is not the real cause of her displeasure, merely a symptom. She dumps Cecil because of his incessant efforts to mold Lucy into some form of womanhood that she is not and because he is an overbearing snob who will not condescend to be kind to the people she loves. Forster offers a progressive view of what women should be able to do and Cecil is the epitome of those that seek to repress women even with the best of intentions.

George and, more importantly, his father convince Lucy that she is made for finer things and can only find love with a kindred spirit like George. As Lord Bryon said, all comedies end in marriage and this ends where it begins in the Pensione Bertolini, with George and Lucy on their honeymoon. Italy has proven to be their fate.
Posted by A Lit Chick at 3:02 PM