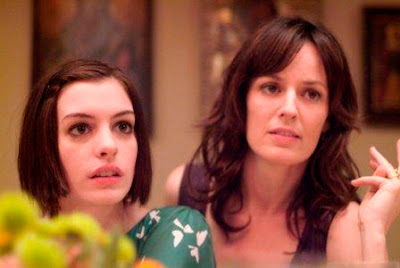 "It's drowning in cool!" my exasperated spouse said after we viewed the film trying to explain his dissatisfaction with the film. We didn't dislike it - we both thought Anne Hathaway and Rosemary DeWitt were terrific as the troubled, warring sisters in this dysfunctional Connecticut family - it's just that this family circle which the talented director Jonathan Demme tries so hard to convince us is real, is so boho, so alternative, that we were both literally cringing by the end of it especially at the wedding party itself.

Sometimes, unfortunately, it comes off as a first rate student film with its hand held camera, unrehearsed scenes, multi-cultural cast with unpretty (read normal) faces, excepting of course Hathaway herself, and so-so production values. It's like a step back into a style of film making that perhaps Demme might have employed early on in his long career.

Kim (Anne Hathaway) is the junkie fuck-up younger sibling who inadvertently harms a family member during a drug induced spree when she was a teen. She has been in and out of rehab ever since. Rachel (Rosemary DeWitt) is the older, more responsible sibling obtaining her Ph.D. in psychology and poised to marry. Kim gets out of rehab a few days before the wedding which is to be held at their father's home in Stamford, CT.

Where to begin with the white, liberal stereotypes? Who knows, maybe this is the way some upper middle class people really live ... The pre-wedding house is a haven for eccentric musicians with odd looking instruments, people of various colours and inclinations (the bride is Jewish, the groom black). The bridesmaids are to marry in saris. Uh - please.

Kim, whom we can tell is a bad girl by her edgy, dark hairstyle, pasty skin, dark circles under her eyes, and smudged eyeliner, wreaks havoc (she refers to herself as "Shiva the Destroyer" at a pre-wedding party for family and friends). She is selfish, narcissistic, irresponsible. She insists on being the maid of honour even though Rachel wants someon else. She crashes her car on the eve of the wedding in a toxic rage of guilt and anger at her mother. She sleeps with the best man, also a recovering alcoholic, fights with her sister, fights with her weak, ineffectual father and the bitchy maid of honour, culminating with a heated, face-slapping argument with her mother.

Hey - I'm not saying the film is not immensely moving nor that Hathaway doesn't do a good job in this role but why is Kim like this? Why does Kim do this? She has done this horrible thing to her family and feels that she has never been forgiven (likely she has not, nor ever will be). But it all seems to come down to her icy, unemotional mother who is played to chilling perfection by Debra Winger and possibly her loving but overly indulgent father.

But you don't become a junkie merely because mommy didn't pay attention to you as a child and daddy was too liberal. Isn't it a bit more complicated than that?
Posted by A Lit Chick at 6:45 PM