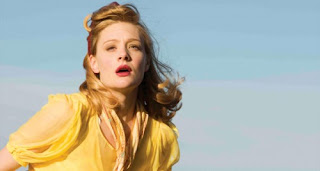 A favorite time period of mine - pre-WWII Britain - and so many good actors in this film: Romola Garai (Atonement), Bill Nighy (Love, Actually and many other films), both of whom were present at the screening, and, the divine Julie Christie (star of Doctor Zhivago, Fahrenheit 451 and Darling).

An intriguing but, at times, confusing plot. World War II is imminent. Anne Keyes (Romola Garai), an actress, adopted as an infant into an aristocratic family, is doted on by her father (Bill Nighy) who is a prominent MP and minister in the government, two seemingly loving siblings (Juno Temple and Eddie Redmayne) and a boyfriend who works for the Foreign Office.

The setting in idyllic, beautiful. It expertly covers the ugliness of the desire of certain British citizens to prevent war with Germany no matter what the cost to Europe and democratic freedoms.

Anne finds herself in possession of some mysterious audio recordings which have been stored on long playing records (remember those?) in her father's home and which appear to be blackmailing a friend. They seem to implicate some highly placed people in an anti-war, pro-Germany plot to prevent Britain from entering the war. People start to disappear: a best friend and MP who supports the war against Germany, a fellow actor, then her boyfriend.

Jeremy Northam, who plays a sinister government official who may or may not be involved in this plot, pops up again. He was also featured in the Darwin biopic Creation with which the festival was kicked off.

When Anne begins to piece together what is happening her world is turned upside down and she finds the people that she most cares for turning against her. How she eludes them is intriguing but odd.

At the screening, the director Poliakoff said that all of the historical info was true which I'm presuming means the anti-war plot, the suspension of habeas corpus, the pro-Germany sympathy amongst the aristocracy, the bugging of the telephone lines of political opponents, Brits sending away their children to protect them from the Germans and people putting down their pets in the event of war. But what I could not tell was the extent to which the aristocracy would go to eliminate evidence and people to protect their dirty little secret. This plot point threw me off, the historical detail with the thriller subplot - did this really happen to certain persons opposed to the "plot"? A frightening but intriguing point.

Minor TIFF of the Day: Bill Nighy doing a very awkward air guitar in response to being introduced to the audience at the Elgin theatre (did I see Romola Garai sniggering?) Come on Bill, both you and I are way too old for that gesture dude.
Posted by A Lit Chick at 9:41 AM