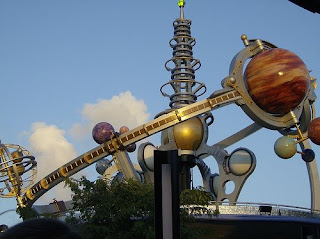 We arrive too late to the Magical Kingdom on Sunday to ride the rides we want to get on but just in time for our lunch at the Royal Table held at Cinderella’s Castle. We are squeezed into the entrance of the castle in ragged, confusing lines, some on the left, some on the right, with Cinderella and an official photographer in the middle section awaiting our entrance which actually takes quite a bit of time, at least 20 minutes to process us. TF, my s-i-l, has affectionately (I hope) started to call me Lady Tremaine after Cinderella’s stepmother because I am getting cranky at certain Disneyesque excesses. Guilty as charged sistah…

“PLEASE royal families you MUST line up TOGETHER in order to be photographed with Cinderella!” a desperate royal attendant yells not once, but several times, into our captive ears. My, the royal attendants are cranky this afternoon, and who could blame them? The space is smallish for this crowd, hot. We are many, they are few.

Then you are led up a flight of stone steps into the main dining hall of the medieval castle to the Royal Table to lunch with the Disney princesses: blonde haired Aurora (Sleeping Beauty), sweet faced Belle in a bright blue dress (Beauty and the Beast), the epononymous and syrupy Snow White, scantily clad Jasmine in green harem pants (Aladdin) graciously signed autographs and posed for pictures with the small princesses and princes. The larger princes (i.e. husband and TN, our b-i-l) also seemed particularly keen to be photographed with Jasmine so we obliged them.

Yesterday I saw one little girl of seven or eight, dressed in full pink princess regalia, walking around stroking her false blond hair piece, lovingly, proudly, as her parents ate on obliviously. Dressing up is fun, imagination and fantasy are fun but do the little girls have to acquire the sexy embellishments of grown women to do that? The lipstick and high heels? The eyeshadow? Why, to what end?

A plenitude of small princesses abound at the lunch… with sparkles in their hair, frosted lip gloss and chiffon dresses which must have been a killer in this 90-95 degree heat. They seem inured to the discomfort. I am shocked particularly as I start to spot a trend. Based on appearances only, the little girls do not seem to come from affluent families, quite the opposite, and I wonder (I’m trying not to stereotype here) what is the psychology of this? Is this a way of saying that my little girl is as special to me as any little girl with more advantages, my little girl is worthy of the princess treatment? Am I making it too complicated, do they just think a six year old with lip gloss is pretty? Frighteningly, one always thinks of Jon Benet’s little face in these scenarios.

I have to say the castle was fun to look at and observe up close with its faux “medieval” banners, stained glass windows, high ceilings, good linen napkins emblazoned with fleur de lis, the serving staff smartly dressed in era-appropriate clothing. The food and service was very good (worth the 2 meal credits). As we left the next Cinderella was in the lobby waiting for her shift, smiling sweetly, practicing twirling her dress, oblivious to onlookers, lost in her own sugar-filled dreams …

On to Tomorrowland (shown above) within the Kingdom with its futuristic 50s architecture that I actually really like; it was like a Bugs Bunny cartoon vision of the future from the 1960s. The shapes of the buildings and the rides were pleasing to the eye, it reminded me of being a kid and thinking of what the future would look like. We wanted to do the Space Mountain ride but it was closed for repairs.

The “fast pass” system for rides only works in theory if you are at the park early enough to circumvent the crowds which we were not this day. You insert your lavender coloured Disney ID into a fast pass machine and it spits out a time when you will be permitted to ride (usually an hour in range). BUT due to the crowds, it could be two or three hours away, sometimes five or six. Also, the fast passes cannot overlap in time. Hence, you must fill your time with sedate rides and entertainments for the very young or the very old (such as ourselves): the cheesy Carousel of Progress which is so dated it should be mothballed, the gentle and boring Tomorrowland train which circumnavigates the grounds above you and the more popular and current Stitch ride.

Ah the Stitch ride! I love to provide entertainment for my family. The premise is that you have entered an extraterrestial military compound which has captured a “level 3”monster (Stitch), the most dangerous monster of them all. You are cast as observers who watch his interrogation. He materializes in a capsule before you in animatronic form and occasionally he “spits” at you the audience. Well, who got a douse of water right in the face? Yes, Lady Tremaine ... I think it was the high point of the day for my relations.

We took a bus back to the hotel and lounged by the pool, which favours a serpent/alligator theme in turquoise, blue and pink. The pool was filled with kids and families, really the best part of our day, watching the girls go down the slide and just thrilled to be in a cool, comfortable environment.

My b-i-l TN suggested a riverboat ride to Downtown Disney. The 15 minute ride at night along the Sassagoula River is quite romantic, quite beautiful actually. Downtown Disney is just a carnival of stores and restaurants, mostly chains and crowded, very crowded. It held few delights for me.

Off to bed and a solid, quiet sleep. I must say that the resort is very dark and very quiet at night. On to Animal Kingdom on the morrow!
Posted by A Lit Chick at 9:23 AM