Making Olives and Other Family Secrets 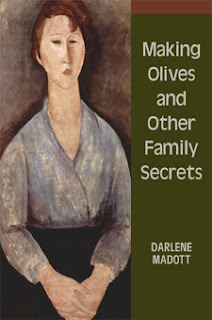 This collection was the winner of the F.G. Bressani Literary Prize for short fiction last year. Coincidentally, this the prize that Nino Ricci won for Lives of the Saints. When I began to read this collection of eight short stories I easily recognized the streak of rage and despair that now seems so familiar to me, that I also see in my own work and the work of other Italo-Canadian women of my generation. For generations, women were powerless, voiceless, except, at times, in the sphere of the home; the written voice of the modern Italian woman is raw, painful, sometimes bitter.

But more importantly, now, it is often defiant and proud of its renegade independence and that's what draws me to Darlene Madott's voice.

There is a susceptibility for women to succumb to certain powerful elements in our culture (not just necessarily Italian culture) - whether that be the idols of family, sexual love, wifely duty or children. It is a siren call that is difficult to resist if you are raised to believe that those duties or ideals come before everything, before your own needs and desires and well being. One character notes in this collection: "For this was love, this wretched devotion ..." which was her undoing as it sometimes controls and destroys the women who embrace it.

But here, in virtually every story, the female characters waver but finally resist the temptation to be swallowed up by lover or family or duty. Here are a few stories that touched me ...

Wild, untamed Aunt Flo in the title story "Making Olives" is "schiaccatta" or crushed like an olive prepared for eating but refuses to be cowed by a bad marriage or an unfortunate fate. She outwits her jealous husband, dabbling in penny stock, amassing a small fortune. The image of the green and black olives (black being ripe, the other not) serves as a perfect metaphor for the fates of the two sisters Vittoria and Florence. There is a nobility to Flo's defiance even though it would be impossible to view her life without sorrow or pathos.

In "Bottled Roses", Jean, a beleaguered prospective bride struggles with the decision to marry Paul, a charismatic, handsome but troubled man on the very eve of her wedding, feeling trapped in her decision like the bottled roses she wanted to give out for her bonbonerie at her wedding.

Francesca heads west to Vancouver to wait out the summer with her father's friend's family after parting with her husband whom she married young in "Family Sacraments". There, the lonely girl gets a glimpse of the kind of romantic love she longs for when she encounters Greg, the widower of Leonora, who married young and died young.

In "Instructing the Young" Julie ponders the fate of her husband Frank's aunt Eva, giving birth to yet another child that she does not seem to want but seems to have little say in, when the young couple visits the family in Hamilton. There is lovely twist where Davide, one of Eva's boys, comes to be a bit enamored of Julie, confusing her with the character of Cinderella that Julie has been reading to him in the classic fairy tale. When Julie leaves him he calls out pathetically, "Don't go Cinderella ... don't leave me!" Is Julie Cinderella running away from her Prince? The entire episode suggests otherwise, a young girl ensnared in a marriage with a million warning signs along the road like the murky atmosphere of the city of Hamilton that they leave behind them.

"The Day I Kissed Pierre Trudeau" picks up on the bride Jean's story begun in "Bottled Roses". Here Jean deals with the aftermath of choosing not to marry Paul. This story is told from the perspective of Jean's sister Rose. Interestingly, Rose has a secret sympathy for her once to be future brother-in-law. The story dovetails nicely with the day the sisters meet Pierre Elliott Trudeau in the small cottage town where the family is "hiding out" after the wedding that never happened.

If I have any reservations with this collection it is with the editing of the book which was not as careful as it should be. The stories often involve many characters within a given family with names that are similar or the same. It is sometimes difficult to discern who is related to whom and what is happening.

I'm intrigued by this book, and will look for it now that I've read your review.

(Shame about the editing quirks, though.)

Yes, she deserves better. I am intrigued by this new voice that women of our generation have acquired - no more martyrdom for them/us (a painful legacy of southern Mediterranean culture I think - not particular to Italians).