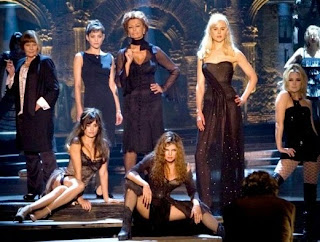 You may have seen me griping on fb about the use of non-Italians in principal roles in this film. The film is an adaption of a 1980s musical about Federico Fellini and a loosely based reincarnation of the Fellini film 8 1/2. It is a homage to the popular myth of a certain type of modern Italy in the 1950s and 1960s created by Fellini on film: sensuous, hedonistic, sexy and fun. Even as the scoundrel Guido Contini exploits and uses the females in his life, with the exception of his revered mother, he charms his way into your psyche as a viewer and lover of Fellini's films. As one character says, "This is your Rome Guido. The world sees Rome as you invented it".

One lady behind me sighed, "Make you want to be be Italian doesn't it?" I totally understood that sigh of envy ... the images were so powerful, the women, costumes and sets exquisite. It's a beautiful fantasy that glorifies the Fellini films of that era.

Well, further to my initial salvo, at least Penelope Cruz (Carla) is Spanish and Marion Cotillard (Luisa) is French. Nicole Kidman had the good sense to request that her character Claudia be Swedish which makes more sense for her in terms of her physical attributes and in that she is meant to represent the Anita Ekberg muse in Fellini's films (vide the over the top voluptuousness and sensuality of Ekberg as Sylvia in La Dolce Vita). Nine reproduces that joyous scene in a much more subdued way here.

Guido Contini (Daniel Day-Lewis) is a famous Italian film director ala Federico Fellini. He is working on a new film, tentatively titled Italia, but has no script, no new ideas and plenty of women trouble. In a panic, he escapes to a hotel outside of Rome to pull himself together, invites his mistress Carla (Penelope Cruz), a delightfully silly feminine caricature, rather than his long suffering and more demure wife Luisa (Marion Cotillard) to join him.

Day-Lewis plays the tormented, philandering Italian artist very well. For me, Day-Lewis has a curiously non-sexual vibe on screen but not so here. Here, he is believable as the oversexed, appetite-driven filmmaker juggling wife, mistress, muse, fantasy sex object (Fergie as the feral la Saraghina from a pivotal scene in 8 1/2) and the admonitions of female close friend Lilli (Judi Dench) and mother (Sophia Loren). See the original portrayal of la Saraghina here.

Like the original Guido Anselmi in 8 1/2, things go awry very quickly. The producer is after him to stay on schedule. His wife Luisa unexpectedly pops into the hotel to join him and discovers Carla to be in the same hotel. Carla, feeling ignored and unhappy, tries to kill herself with pills. Claudia, the muse of his most famous films, declines to play the role any longer.

This really is a film about the women in Guido's life and in a feminist twist the key female figures in his life all take turns walking away from him and his obsessions.

Penelope Cruz plays the ditzy and sexy Carla to perfection. Kidman is the right combination of icy beauty and sex kittenish charm as the Swedish film star/muse Claudia; Loren is looking a bit leathery nowadays but still has a lovely, regal bearing as Guido's venerable mother. Marion Cotillard, who is much prettier than the real-life wife of Fellini, Giulia Massina, still conveys the sweetness and innocence of that actress. Fergie is stunning as Saraghina: feral, all overt sexuality and aggression. Hudson has just the right amount of American swagger and aggressiveness to play the predatory reporter who is after Guido. Judi Dench is sexy and charming and wise as Lilli the costume designer and confidante to Guido.

They each get show-stopping musical numbers the most riveting being "Be Italian" by Fergie using both elements of traditional Italian music and a more traditional Broadway score. Fergie practically blows you out of the theatre with that voice of hers.

But they are all wonderful: Penelope Cruz as a burlesque dancer in the opening song "A Call From the Vatican" is delectable. Even Kate Hudson as the smarmy reporter in love with Guido's movies and all things Italian has a sensational number in "Cinema Italiano". Judi Dench does a memorable turn in "Folies Bergere" with a sort of Marlene Dietrich campy accent and a bevy of gorgeous jewel encrusted girls with feathers in the background. They all have their star turns including Cotillard in "Take it All", Loren in "Guarda la luna" and Kidman in "Unusual Way".

When Luisa sees a screen test with Guido making the same moves on a beautiful young actress that he used on her at their first meeting, she finally leaves him to re-pursue a career in acting. Claudia refuses to play the muse. Carla goes back to her husband after a failed suicide attempt. The film "Italia" falls apart. Only the ghost of Mama remains to help him nurse his wounds. He walks away from the film and goes into a kind of hiding.

But in the end, the creative impulse cannot be dimmed and we see a fabulous coming together of the real and fantastic when all the characters in his life gather on a sound stage at the end.

Wonderful. I would happily see it again and again. It inspires me to see all of Fellini's films again, but especially 8 1/2.
Posted by A Lit Chick at 8:35 AM

hmm. it sounds nice. thanks. I'll have to catch it sometime.

I think I want to work my way through all of Fellini's films again! :)