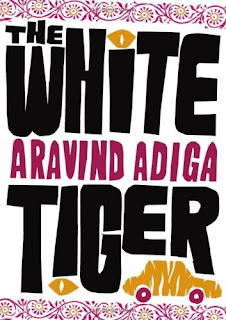 Never before in human history have so few owed so much to so many ... A handful of men in this country have trained the remaining 99.9% ... to exist in perpetual servitude; a servitude so strong that you can put the key of his emancipation in a man's hand and he will throw it back at you with a curse."
The White Tiger by Aravind Adiga (Simon & Schuster, 2008) 276 pages

The really wonderful thing about my book club is that it compels me to read things I ordinarily wouldn't read - this book being one of these instances.

How to describe our hero Balram Halwai? Member of a "low" caste of sweetmakers in India. Servant. Chauffeur. Small business entrepreneur. Oh yes, and, murderer.

He starts life as a poor Indian boy born in "the Darkness" with a searing, subversive sense of humour and an acute sense of the injustices of caste society in India. Early on, as a young boy, Balram is described as a unique and intelligent boy, a once in a generation phenomenon - a white tiger.

He begins the novel as a fugitive, a man wanted for murder, sitting in office alone, transfixed below a chandelier in his small office, writing a letter to a Mr. Jiabao, a Chinese official whom he has read in the newspapers will be visiting Bangalore to "meet some Indian entrepreneurs and hear the story of their success". Balram is very anxious to speak of his success as an entrepreneur and we are anxious to hear his story because the first thing he tells Mr. Jiabao is that he has murdered someone and is on the run ...

This is an India, the publisher describes, composed of "the cockroaches and the call centers; the prostitutes and the worshippers; the ancient and Internet cultures; the water buffalo and, trapped in so many kinds of cages that escape is (almost) impossible, the white tiger."

Balram's initial ambition is to become a driver primarily because he covets the pristine uniform. He succeeds in convincing a wealthy family of landlords to take him on even though his caste dictates that he should be a sweetmaker. But his position as a driver doesn't begin to encompass his domestic responsibilities: cook, masseur, cleaner, household servant, dog-washer and general dogsbody at the service of all in the household. He sleeps in the basement of the apartment in a hovel with the other servants who are summoned by a bell.

Alternately horrifying and grotesquely funny we experience Balram's vicissitudes. The patriarch, known as The Stork, is a vicious oaf whose feet Balram regularly massages. The eldest son, The Mongoose, is a chip off the old nasty block: bigoted, spoiled and cruel. The second son Ashok, whom Balram primarily serves, is somewhat less vicious and often has a guilty conscience about the inequitable relationship. Pinky Madam, Ashok's wife, is another story: perhaps an even uglier emblem of the new entrepreneurial India, greedy, selfish, spoiled, immodest and callous. Of all of them, Balram is most devoted to Ashok who seems to pay for all their transgressions.

Balram is forced by his masters to sign a confession to the accidental killing of a child when Pinky Madam runs over the child in a drunken spree. Balram assures the reader that this is a common fate for drivers in Delhi - to assume responsibility for their masters' crimes. And the boy's family colludes in this, proud of Balram, who has acted like "the perfect servant". At all costs, they wish the money that Balram sends home to continue no matter what degradations he suffers.

But Pinky Madame runs away after the accident, terrified by what she has done leaving thousands of rupees for Balram (out of shame? guilt? fear?) and Balram experiences a narrow escape because the crime is never reported.

How, Balram wonders, can a man break out of this trap - this roosters' coop where the poor are trapped and subservient and oblivious of this trap? Only "a man who is prepared to see his family destroyed - hunted, beaten, and burned alive by the masters. That would take no normal human being, but a freak, a pervert of nature. It would take a White Tiger." Because even if Balram rebels, the masters would then turn on the family in a horrific and violent way to gain their revenge. And this, Balram reasons, is why few refuse to rebel.

Ashok falls apart with Pinky gone. Inexplicably, Balram suffers too. He starts to rebel, tries to frequent a prostitute with humorous results, steals from his master, siphons gas out of the car, goes to a sleek upscale mall which he sees as a luscious, forbidden piece of fruit and plots his escape. And it will not be pretty. Definitely not pretty.

Many words come to mind to describe this book: amoral, hilarious, biting, frighteningly true to life. India.
Posted by A Lit Chick at 9:12 AM

I loved this book. Gave me the same pleasure as Q&A -as an unexpected gem. Q&A went on to be retitled Slum Dog Millionaire as the film, but that was a real fluke read for me as I simply picked it up unrecommended one day at the book store. I love it when those choices turn out to be brilliant.