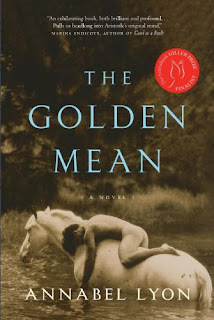 Once, when I showed my fiction to the assistant of a major literary agent whom I hoped to impress he casually commented to me, "Well, it's better than the work we receive at Descant [the literary journal we both volunteered at] but not as good as Annabel Lyon." Lyon had just acquired said agent as her representative.

Hmm ... That put a nasty little bee in my bonnet and so I consciously avoided Lyon's work for some time after that. You didn't know that writers were that immature did you? Well, they are.

Historical fiction is a difficult genre to pull off in a realistic, non-academic way. I know because I have tried with mixed results. Since my initial foray into this area, I have tried to pull back on my overwhelming desire to "teach" the reader or show off my historical research which is a frequent obstacle in the enjoyment of historical fiction. In my writing, I try to include enough detail to create believable, fact-based scenarios but not so much that the reader is overwhelmed with that detail and bored. I think I stole this theory from that half-assed writer James Ellroy but he did have a good point.

The Golden Mean is about the relationship between the Greek philosopher Aristotle (384-322 BC) and his pupil Alexander (the future Alexander the Great). Insert biiig yawn here ... Okay, are you done? I know, I know. But the book is neither dry nor boring. It is unexpectedly funny and profane and smart. I enormously underestimated her talent which is huge.

"The Golden Mean", as a philosophical concept, is "the desirable middle between two extremes". Lyon simply but effectively re-creates a believable version of the fictional mind of Aristotle, portraying the philosopher as both intellectually intriguing and immensely human. As the story begins he has accepted the role of tutor to the son of his boyhood friend King Philip of Macedonia who, as a famous warrior, has lived a "life in meat".

So begins an extraordinary relationship between the beautiful, arrogant boy who would be king and Plato's favourite pupil. Alexander, I soon realized, was trying to strike the golden mean - a balance between the cerebral life of his tutor Aristotle and his warrior-king father Philip.

The ancient world pictured here is not sanitized or made pretty, like a BBC production, which makes the reading more engrossing if disturbing. Men cheerfully defecate on the streets; Greek men speak casually of their preferences for boys or girls; Aristotle, as a boy, unblinkingly procures teenage prostitutes for his tutor Illaeus; the mentally challenged such as Alexander's brother are disparaged and insulted (sometimes even by Aristotle and by their closest family members); and, as an adult Aristotle unabashedly holds slaves as many affluent Greeks did whom he says he considers to be "family".

It's not a pretty world at times but it feels authentic. The sentiments are not politically correct and they create an intensely vivid world which is thoroughly believable.

Aristotle's story moves smoothly from his experience as Alexander's tutor to Aristotle's life as a boy. He travels with his physician father and aids him. Although obviously bright, the father is puzzled by Aristotle's quirky cerebral personality as the boy will not fall neatly into any occupational slot that is planned for him. He is not a warrior (too gangly or delicate), not likely to be a physician like his father (he dislikes it), is not terribly athletic.

His father tries to mold him into a teacher or, possibly, a dramaturge. Nothing seems to satisfy his father so Aristotle's confidence ebbs and flows even as he displays tremendous talent in the areas of science and writing. When his father suddenly dies, Aristotle leaves for Athens and eventually becomes Plato's most famous pupil.

Aristotle's medical training, through his physician father, makes for some inspired passages of humour: how sperm is produced (hmm), if women can have orgasms (apparently they can't), what causes depression (an excess of black bile).

The small "witch" Athea, who comes to serve as a slave in the Aristotle household suspects, immediately and correctly, that all is not well between Aristotle and his wife Pythias and seeks to remedy that by helping Pythias become pregnant. Through potions? Incantations? In any event, Pythias soon bears a daughter, also named Pythias.

But Pythias sickens and dies replaced by the capable and much more warm-hearted servant Herpyllis ("She's not the green sprig Pythias was," observes Aristotle dryly) who bears him a son.

King Philip is eventually replaced by Alexander by the most unnatural of means - I won't reveal how or what happens to his youngest wife Cleopatra and their daughter but these were cruel and ruthless times.

Alexander must display his mettle now ... a leader of thoughtful men or a leader of men of action? He must prove himself and does so with such astounding results that we still speak of him today. Eventually Aristotle leaves his pupil and Alexander must find his own way.

Post-script: Just finished listening to Lyon on Michael Enright's The Sunday Edition on the CBC Radio One. What I hadn't really talked about was Alexander as a boy soldier and what Lyon describes as an ancient Greek form of post-traumatic stress (called "soldier's heart" here). The book is as much about this as about his relationship with Aristotle.
Posted by A Lit Chick at 8:08 AM