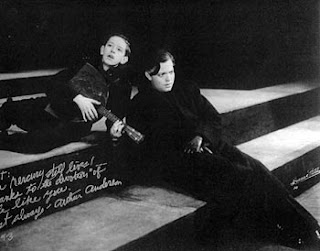 Utterly charming and intimate and a terrific way to start the festival on my first day after the disappointment of Burn after Reading. It depicts one week in the life of Orson Welles (played brilliantly by the English theatre actor Christian McKay) and an aspiring young teenage actor named Richard Samuels (Zac Efron of Highschool Musical 1 and 2 fame) as Welles prepares for the premiere of a production of Shakespeare's Julius Caesar at the revolutionary Mercury Theatre in New York in November of 1937. The photo above is taken from that 1937 production with Welles as Brutus and Arthur Andersen as Lucius, the role that Efron plays in the production.

I thought to myself, with a laugh, that my 11 soon-to-be-12 year old will be sooo angry with me as the actor Zac Efron was at the screening and spoke briefly before the film. And he was surprisingly good as the ambitious actor who finagles his way into the production and clashes with Welles over his infatuation with Sonja (Claire Danes), a lovely Vassar girl and Welles' right hand "man" in the theatre who can operate with the best of them to get her own way. Welles, monstrous ego and all, finds a way to eliminate the boy from the production after the opening night despite the boy's loyalty and constancy because he dares to challenge Welles.

Mckay, who was in a one man show in New York about Welles where Linklater found him, plays him as a charming, irascible, devious, hot tempered, brilliant egomaniac who manipulates everyone around him - from the troupe of Mercury Theatre actors, investors, various paramours, to his deceived and pregnant wife Virginia.

The costumes and New York scenes are picture perfect ... perhaps too much so? It lacks that gritty quality that a New York street has no matter when it is meant to be staged. Everything is clean and shiny and the clothes well pressed and everything just so. Surprisingly, none of it was shot in New York but on a stage in England which Linklater revealed at the screening.

Linklater was friendly and eloquent despite a couple of feeble questions from the audience. McKay was charming and lovely and a perfect evocation of the young Welles. He spoke about resisting the constant comparisons to the young Welles whom he once thought of as a "fat failure".

Embarrassing footnote:
Friendly Torontonian that I am, I failed to acknowledge the hello that the author of the book of the same name, Robert Kaplow, made when he sat down beside me in the theatre. I had no idea who he was but he violated TIFF etiquette so he caught me off guard. Generally you do not sit beside another filmgoer if the theatre is not crowded (it wasn't) especially if the filmgoer is female. Chilly Canadian that I am I failed to acknowledge his greeting and felt doubly foolish when the director introduced him from the front where he was addressing the audience. Oh well, that will learn me to be stuck up ...
Posted by A Lit Chick at 6:32 PM

This is Robert Kaplow. Glad you liked the film. Sorry if I was too friendly, but I was in a merry mood.

Oh how awful - I'm so sorry! Only in Toronto must a man apologize for being friendly to a woman he doesn't know. I was just caught off guard and I immediately felt foolish afterwards for being so rude. I'm not ordinarily so.

I hope you read this comment because I was wondering if Arthur Andersen's experience with the production was comparable to the fictional character of Richard Samuels (although I see he looks quite a bit younger)? I was trying to determine that before I wrote the blog but didn't have time to find out the whole story.

Wonderful fictional premise - am a bit obsessed with Orson Welles myself.

Anderson was only 14 when he was in the play--so his experience was a good record of the physical shape of the production. But the emotional story is all my invention. Sonja is my invention. An older RIchard made the tale much more interesting!

Have you read the Callow books? I tried to read Hello Americans but it put me to sleep after 100 pages. I still have it on my shelf though. May try and tackle it again.