"Life; London; this moment in June" 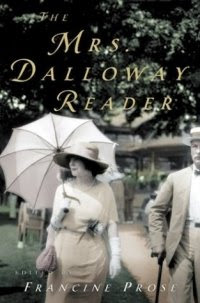 This is one of the books I picked up at The Strand bookstore in New York last summer - one of my favorite bookstores ever.

I must say the essays in the reader are disappointing. Few light a fire under me or makes me understand Virginia Woolf better - they are deary, academic, boring, except perhaps for:

E.M. Forester's 1925 essay "The Early Novels of Virginia Woolf"; Michael Cunningham's very brief two page piece on Mrs. Dalloway; and, Daniel Mendelsohn's insightful New York Review of Books piece entitled "Not Afraid of Virginia Woolf" which may be read in full here. I can't believe that this is the best (or most interesting pieces) that Francine Prose could find on Woolf. Everything else could be easily eliminated.

I did enjoy re-reading the short story The Garden Party by the New Zealand writer Katherine Mansfield, included here, because you realize again how inspired by Mansfield Woolf had to have been for her own book: the preparation for the party, the death of a young man, etc ... all are featured in Woolf's book.

It also did allow me to re-read Mrs. Dalloway, one of my favourite novels of all time. Each time I read it I see how the various characters seem to me to be slivers or facets of VW herself:

She is Clarissa Dalloway as an idealized version of Woolf herself, aristocratic, beautiful, slightly snobbish, emotional, infatuated with beauty, "cared too much for rank and society" as Peter Walsh phrases it, but bearing the elegance, poise, the self-assurance with servants that VW herself lacked. But perhaps Clarissa is more like Virginia's mother Julia Stephens whom she idolized, whom Virginia wanted to emulate. "She muddled Armenians and Turks; loved success; hated discomfort; must be liked; talked oceans of nonsense: and to this day, ask her what the Equator was, and she did not know."

She is Septimus Warren Smith, the wounded soldier, haunted and damaged by the first World War, "muttering messages about beauty" who hears the birds speaking in Greek to him. This precisely describes VW's own periods of insanity. Septimus who tried to kill himself and finally succeeds (as does VW).

She is beautiful Sally Seton, with whom Clarissa was once in love. Wild, unconventional Sally, with radical views that disturb some, delight others. With Sapphic tendencies and, in the end, very conventional aspirations ...

She is Richard Dalloway, Clarissa's husband, who "cherished these romantic views about well set-up old women of pedigree"as did VW ...

She is thorny Peter Walsh, Clarissa's one time suitor, a non-conformist, a failure of sorts who cannot navigate society, who sees through all the charades of class and rank...

She is the mundane Hugh Whitbread, enamored of the monarchy, with class, with rank ... with his fatuous fountain pen which never falters "somehow to his credit" Richard Dalloway observes wryly and with which he writes letters to the Times on behalf of Lady Bruton.

She is Elizabeth Dalloway, Clarissa's daughter, young, impressionable, easily moved to embrace causes and people who are lost ... She had "become very serious; like a hyacinth, sheathed in glossy green, with buds just tinted, a hyacinth which has had no sun."
Posted by A Lit Chick at 8:21 AM