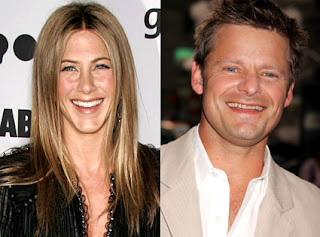 Jennifer Aniston, as charming as she is, seems limited to certain types of roles either because these are the ones she selects or these are the only ones that she is offered on the indie film circuit (the “charming romantic comedy” as the TIFF program book states). This is standard Aniston fare: light, quirky and as ephemeral as candy floss.

Hence, we see the grocery clerk with low self esteem and the horrible boyfriend in The Good Girl (2002); the flaky object of Ben Stiller's desire in Along Came Polly (2004) . disillusioned, former teacher turned housemaid in Friends with Money (2006) and this film. She is usually a damaged, under-confident, pretty girl with some kind of unhappy history that a quirky boy/man saves her from.

Here she is as Sue, a seller of “art” to small motels working for a company called Corporate Bliss based in Maryland. On her travels through Arizona she meets Mike (Steve Zahn), who works in his parents’ roadside motel near Phoenix in pretty dreary circumstances and obviously yearns for something better.

Sue is pretty much the hottest thing that Mike has ever seen and is immediately smitten. He pursues her with his earnest puppy dog advances and she grudgingly sleeps with him and then returns home to Maryland.

Mike impulsively buys a one way ticket to Baltimore and tracks her to her workplace where she is less than pleased to see him. She resists his entreaties that they become a couple and he returns home again but he can’t get Sue out of his system. The attraction is a little hard to fathom – she is cold, rude and withholding and yet, she is Jennifer Aniston and he is, well, he is Steve Zahn, a man-child as Cameron Bailey describes. It’s wearing a little thin isn’t it – this whole man-child business and I guess we only have Judd Apatow to blame for all those films featuring Seth Rogen et al … This seems an odd coupling on film with a so-so chemistry.

He tries to find her yet again only to discover that Sue has moved to Aberdeen, Washington (home of Kurt Cobain) to live with an “ex-punk” and ex-boyfriend named Jango who is now a frozen yogurt entrepreneur played with menacing authority by Woody Harrelson. Again, why would these two people be together? Jango is rich, has a kennel of vicious dogs at his home which he uses to terrorize people, shoots would be intruders with BB guns and pummels Mike when he discovers his relationship to Sue.

Sue, whose dream it is to manage a homeless shelter, wants to marry a rich thug because he can finance some of her dreams? And, oh yes, she is pregnant with his child, perhaps a plot twist to make the whole thing more “palatable”. Yes I suppose some, or many women, would do this.

The plot which starts simply and sweetly becomes silly and annoying with a series of sight gags none of which are particularly funny: Mike parachuting into Jango’s pool to get to Sue; Mike hooking up a sound system out of the remnants of a Chinese delivery cart and singing outside her window at night with a friend; living in the basement of a Chinese restaurant just to be near her; becoming a Buddhist monk with an obsession for volleyball when he is once again rejected by Sue, etc …

I’m sure this is all meant to be seen as wacky and fun but it doesn’t register as such for me. Hey, I’m all about wacky and fun when it hits the right notes but here it does not.
Of course, Sue achieves her dream with the help of Mike's generosity (through a fortuitous act of good fortune on his father’s part) but despite an early scene where we see Sue distributing coupons and drinks to the homeless we can sense nothing about this cold, uninviting personality which would suggest that she could take on this sort of enterprise.
Posted by A Lit Chick at 6:28 PM

so, whatever happens to the motel business?

Hello Anonymous, the father hands over the deed to son Mike and they turn the motel into a homeless shelter as per Sue's dreams (come on!). I WISH life was like this ... :)