And then Pandora opened the box ... 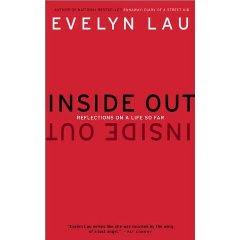 Inside Out: Reflections on a Life So Far by Evelyn Lau (Doubleday Canada, 2001) 238 pages

Now 38, Lau's relatively short life has been quite tumultuous and well documented primarily by herself. These disturbing but engrossing essays were published eight years ago and the personal history that it offers is an intense array of daunting topics. She has always demonstrated herself to be prolific, brilliant and troubled.

She is a modern day Pandora opening a box of unrelieved misery at times. There are so many areas that might cause discomfort or sorrow here for herself and for the reader: teenage prostitution; her self-admitted father fixation; an early history of bulimia; a troubled family past, and, a messy libel suit pressed by former lover W.P. Kinsella, which raises ethical issues about the writer's right to tell all, among others.

Cliched as it sounds, she did have a devastating early youth. She is perhaps most famous for running away at fourteen, becoming a prostitute on the streets of Vancouver then writing an amazing account of her experiences in her book Runaway: Diary of a Street Kid, published at the age of 18. She displayed an astounding talent at a very young age.

Sadly, and obviously, I think the experiences which she writes of in "The Shadow of Prostitution" colour everything in her life from her familial relations to her sexual experiences as an adult to her writing and friendships.

She understandably resents intrusive questions or speculation about her past life on the streets but the truth is people always seem to remember the worst thing that's ever happened to us: whether it is the loss of a loved one, a tragic illness, a philandering partner or, in Lau's case, her history as a prostitute. As she says, "For me the past bleeds into the present." So it does for all of us, but this is a history that she will never wholly leave behind.

Her self loathing as a young girl was like a loaded gun she kept in her pocket at all time. At any moment it might be the trigger that could destroy her; it nearly did many times over. One wonders what prompted such desperate acts: the seeming withdrawal of her adored father's affection as she reached puberty? Her mother's intrusive and abusive emotional behavior? Her own disgust with her changing body? Here is a bright, sensitive, talented girl who implodes with grief and self-hate and drops into a frightening underworld of johns, drug use and self-abuse. It's utterly horrifying to contemplate.

"The Country of Depression" tries to map out her inner turmoil from an early age. The bouts of depression began at twelve or thirteen. It appears to me that it coincided, or was triggered by, what she perceived as her father's seeming rejection of her and a perceived favoring of her younger sister. It seems to be the first of many emotional losses.

So many factors may have contributed to this state: her strained relationship with her conservative parents, a sense of self loathing regarding her appearance as she approached teenagehood, her sense of otherness as a young girl of Chinese descent growing up in Vancouver in the 1970s.

There is a sort of narcissism attached to the state of depression which she rightly pinpoints: the desire to demonstrate how much one suffers. She honestly professes her own displeasure with friends who seem wholly absorbed and arrested by their own bouts of depression.

The essay "The Dream of the Purple Dresser", which concludes the book, reiterates a theme she often writes of: how an early tumultuous family life, epitomized by a lavender coloured dresser which her parents rescued from a neighbor's refuse, has pursued her in every aspect of her life. The dresser, which she still owned when she wrote the essay, in its ugliness and her inability to give it away, is the concrete symbol of a past she cannot escape.

"Distance, for me, kindles desire." she begins in"Father Figures". Her father fixation is something that she has talked about openly for many years. It spills over into one's sexual relationships of course. I admire her bravery in speaking of this - but is it bravery I sometimes wonder or an inability to keep one's thoughts to oneself, to control one's impulses which may embarrass or compromise others? Is everything open to examination and public disclosure for a writer? The quotes from other writers is telling: writers always betray those closest to them and Graham Greene observation that “every writer needs a sliver of ice in their heart”.

It's too easy isn't it to betray others with our confessions, our need to tell our own stories. Mea culpa, mea culpa, mea culpa. Lau would say yes, this is true (as would I), as is likely proven by the long essay she wrote about her legal troubles with Kinsella.

Disappointingly for me, Lau devotes a 62 page long essay ("Anatomy of Libel Lawsuit") to the libel suit that W.P. Kinsella launched against her for an article she wrote entitled "W.P.and Me" in Vancouver magazine based on their two year relationship. Kinsella, who is close to forty years older than Lau, felt belittled by her personal comments and therefore sued soon after the publication of the article.

Lau wastes a good deal of energy for herself and the reader trying to prove that she should be able to say whatever she likes as long as it is true, quoting law texts, other writers who have written about ex-lovers, etc ... She describes her sense of rage and frustration that she was now being penalized for the quality that makes her a writer, unflinching honesty and the desire to tear the veil of hypocrisy away from human relations. She likens her rage to the time her father struck her violently on the hands with a ruler, exasperated by her stubbornness regarding the importance of her writing. The rage and frustration she felt then, she felt again with the libel suit.
She says of that episode:

I seemed fundamentally unable to understand ... that to expose another's intimate self to the world would cause that person to wish to hurt me in whatever ways they were capable. I till expected everyone, including myself, to give that up for the writing, which was a higher purpose.

As much as I admire her work, I sometimes suspect that there is something lacking in her perception of herself and her world view. I don't know if it is narcissism or lack of common sense. I almost wrote sociopathy (now known as the more politically correct psychopathy) but that is an unfair and unqualified assessment to make of another human being on my part.

She expresses a naive astonishment that telling the truth, as she sees it, should be forbidden or curtailed and likely this is at the root of her problems with Kinsella who vehemently objected to the personal observations she made about him. I don't know if it is brave or foolhardy to expect that everyone will agree with this point of view.

But I also think it was this phenomenal self-absorption and regard for her own writing that pulled her through the various crisis. Hence, the mystified resentment and rage that she should curtail her observations in writing. It's as if we are asking to to deny the very core of her own being.
Posted by A Lit Chick at 8:03 AM