Day 3 at Disney World: In the jungle, the mighty jungle … 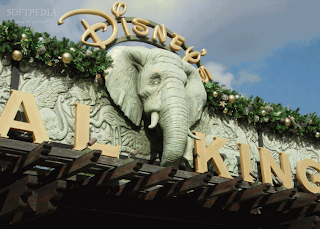 A late start this morning … We are all definitely on holiday mode and are taking our time getting ready and leaving for the busses that take us to the park du jour. This is a fatal error here (the lateness I mean). It was horrendously hot and crowded when we reached the Animal Kingdom Park but we were in a very beautiful physical environment which tried to recreate gorgeous exotic locales in Asia and Africa and largely succeeded: lush vegetation, Buddhist shrines, gorilla habitats, weathered colonial outposts which had seen better days – utterly convincing in their presentation.

But by the time we had arrived we only had the chance to sign up for two rides through fast passes and those were hours away, hours! There did not seem to be as many rides I believe in this park. The Kali River Rapids is a white water rapids excursion with a circular raft, which seats nine or ten, and sends you down a swift current. “You may get wet” it helpfully states as you enter the ride and wet I did get – are you detecting a theme yet? It was as if someone had poured a large bucket of water right over my head as we hurtled down the rapids. J was the next wettest as she was sitting beside me. More entertainment value for la famiglia!

Later standing outside, sopping wet, I think I attracted the attention of another couple Mary Lee and her (I presume) husband from Massachusetts. We struck up a conversation. They were there with their four kids and were to leave the next day. She very kindly handed me some fast passes for the Magic Kingdom and youth passes for the Water Parks. Americans are, we found, in general, very friendly, very kind. Certainly more approachable than their chilly northern cousins in scenarios such as these. I will e-mail Mary Lee to thank her when I get home.

We also had fast passes for Expedition Everest a rollercoaster ride which would be available after our dinner reservations at BOMA, the restaurant at the Animal Kingdom Lodge just a few minutes away. Usually these exotic decors do not appeal to me but this one in the lodge did – dark wood, animal motifs, oversized furniture, restaurant staff in colorful “African” clothing, clean, modern design. I usually feel like "why do I want to go somewhere that is pretending to be something else entirely different than its true location – how is that fun or interesting?" The buffet was excellent, the best so far, with a wide variety of food and tastes. The table service was quite good and the staff very pleasant.

I was still soaked from the ride and really did not relish the idea of the Everest rollercoaster ride so I headed back to the hotel by bus by myself and the others ventured on. (I have just watched a youtube video of the ride and am nervous just looking at it).

I had a quiet two or three hours by the pool where I wrote, read, watched the kids playing in the pool and was joined by a happy and tired family a while later at dusk just as the sky was fading into deep blue.
Posted by A Lit Chick at 9:18 AM