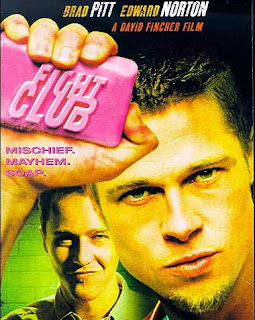 So enamored of the film am I that I went to search for the book at Circus, a neat little bookstore in my area.

When I saw the film again I recognized that I had slowly absorbed some of the writer Chuck Palahniuk's ideas into my own thinking - how, inadvertently, the role of men has been altered through modern civilization in the West. Men who, for many millennium, have seen themselves as warriors, as protectors, as men of action and, also, possibly men of violence now perceive themselves primarily as consumers. Of how consumerism has "emasculated" them to a certain extent and become the basis of their self worth. Heroism, personal valor, courage, physical strength are now not necessarily the barometers of masculinity. Material wealth and corporate success are now the barometers.

Of course, I am not advocating that war is good nor that physical violence is an intrinsic part of the male psyche. But I think that men who know and respect their father's and grandfather's exploits as soldiers and workers and the primary bread-winners find themselves at an impasse in terms of their identity today. It has left a generation of men lost and purposeless. I think this is what Palahniuk wanted to explore. It certainly is worth exploring.

So thoroughly emasculated are we led to believe the hero of the film Jack (Edward Norton) to be that he shops from IKEA catalogues and attends one of a number of support groups for the weeping men suffering from, in one session, testicular cancer. Could it be more obvious what Chuck Palahniuk, the writer of the novel upon which this film is based, thinks of men in the modern Western world?

It is a sometimes queasy, sometimes intriguing, treatise on the modern male who has lost his way.

The personal histories of Palahniuk's father and grandfather are loaded with graphically shocking violence. His father's own behavior towards him seems inexplicably aggressive. Perhaps it became an obsession, this concern with violence, something he believes he can't avoid or control or something that is embedded in his DNA.

Jack (the main character is unnamed but sometimes uses the name Jack when referring to himself in the third person) is described as the "byproduct of a lifestyle obsession" and this obsession has destroyed his true nature the film implies. He is so unhappy that he attends these support sessions merely for the privilege of weeping openly. He likes it so much he makes the rounds of other self-help sessions - various cancers, tuberculosis, alcoholism, etc ... He says when people think you are dying they really really listen to you instead of just waiting for their turn to speak. Jack finds himself weeping into the arms of Bob (Meatloaf), literally a ball-less former weight lifter who has developed breasts from a hormone imbalance.

Jack can't sleep and these sessions permit him that until he meets Marla Singer (Helena Bonham Carter). A smart mouthed goth-looking hottie, she populates the same sessions as Jack. He wants her out, he can't think or weep when she's there but she refuses to leave - it's a diversion which she finds cheaper than movies, and, she enjoys the free coffee.

Jack's life soon implodes. He meets the unbelievably hot and dangerous looking Tyler Durdan (Brad Pitt) on a business flight. Red leather jacket, loud shirt, cool punky hair, belligerent sneer ... completely captivating on screen. And don't even ask what the soap that he creates for his soap business is made from.

Jack's condo inexplicably blows up and he is left homeless. He seeks refuge with Tyler and Jack is soon exposed to Tyler's cocky nihilism. His anti-consumerist rant is foul-mouthed romp capped with a strident "Fuck Martha Stewart!" in the middle of it. Tyler lives in a dilapidated, filthy house with intermittent electricity and no worldly goods. It's a testimony to his disdain for possessions.

On their first night together, after three pitchers of beer, Tyler invites Joe to hit him and they begin a grimly joyous, fist filled fight which attracts other men, passersby anxious to participate.

Jack goes to work with bruises and cuts and a mouth full of bloody teeth. No one comments on this. He ceases to care about possessions, about work, about the therapy groups he once so avidly attended. Why? Because he was found his "true" nature? That of a fighter? A destroyer? Is that what being a man means here?

Tyler addresses the men in the club:
I see in fight club the strongest and smartest men who've ever lived. I see all this potential, and I see squandering. Goddamn it, an entire generation pumping gas, waiting tables; slaves with white collars. Advertising has us chasing cars and clothes, working jobs we hate so we can buy shit we don't need. We're the middle children of history, man. No purpose or place. We have no Great War. No Great Depression. Our Great War's a spiritual war... our Great Depression is our lives. We've all been raised on television to believe that one day we'd all be millionaires, and movie gods, and rock stars. But we won't. And we're slowly learning that fact. And we're very, very pissed off.

Things start to go awry ... Tyler sleeps with Marla much to Jack's annoyance. Tyler burns Jack's hand with chemicals as if to brand him. Jack quits his job and blackmails his boss into continuing to pay him as an outside consultant to subsidize the fight clubs.

The men are given "homework assignments" - picking fights with strangers, destroying a piece of corporate art or trashing a franchise coffee shop and wreaking general havoc in the city.

Tyler begins to build an army; its purpose is initially unclear. His acolytes move into the house. An underground movement begins called "Project Mayhem". Jack seems unaware of what's happening. Then Tyler disappears. Jack steps into Tyler's shoes. The movement assumes cult-like aspects (as if it didn't have one before). There are disciples everywhere enabling Tyler in his mission. A secret society of men devoted to mayhem.

Jack slowly comes to the realization that Tyler is a figment of his imagination, his id run wild and he is taking over Jack's consciousness. It's a shocking, delightful twist. Then we realize that we never see Marla in the same room with both men - one or the other but never both. And we understand why she is so angry with Jack. When she is with "Tyler" he is a super assertive, overtly sexual being. When she is with "Jack" he is a taciturn, uptight jerk who ignores her.

Tyler/Jack is planning to blow up ten buildings housing credit card companies with his small army so that they may all be "freed" from their consumerist obsessions. Jack "confronts" Tyler and a surreal battle ensues with Jack trying to drive Tyler from his mind and his life. Mayhem reigns. Is it a happy ending? You decide.

Ten years ago, the film disturbed me. Now I think I get it. I don't entirely approve but I get it.

But take a look at this glimpse of real fight clubs. Less than a month ago, New York experienced a Fight Club influenced bombing incident at a Starbucks. It ain't exactly Brad Pitt in a bloodied tee.
Posted by A Lit Chick at 9:21 AM