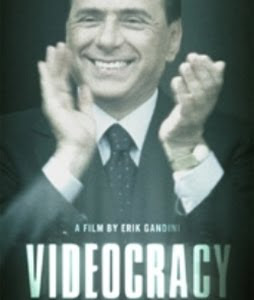 "In a late evening of 1976, a local Italian television broadcasts a quiz where viewers at home have to answer questions. For each correct answer, a housewife takes off a garment and does a brief dance. The format is simple and very successful."
www.inaltreparole.net

Thus begins Italy's romance with the veline, the semi-nude TV girls who stand by the host, silently, gyrating to music during commercials, that infest Italian TV as documented by Erik Gandini, an Italian born director now living in Sweden, who also narrates this documentary.

Gandini profiles a quartet of stooges who define the new media culture in Italy: Silvio Berlusconi, the prime minister of Italy; Fabrizio Corona, a former purchaser of paparazzi photos turned extortionist and media celebrity; Ricky Canevali, an amateur singer and not so talented karate studying mechanic who aspires (truly) to be a combination of John Van Damme and Ricky Martin; and, Lele Mora, an ever grinning, tremendously successful talent agent who works hand in hand with Berlusconi and represents many of the TV celebs who currently crowd Italian TV.

Gandini paints a depressing picture of a populace infatuated with Berlusconi and all his sleazy antics. Hundreds, if not thousands of girls, audition for the roles of the veline yearly. Voters disregard his manipulation of the law to protect his media business interests. His stranglehold over the media in Italy in television and print remains unquestioned and unchallenged. His numerous "love" affairs appear to be lauded rather than condemned and his bon vivant image admired.

The serpentine and multi-tattooed Fabrizio Corona goes from buying the incriminating photos taken by paparazzi to blackmailing celebrities for the same photos (he even does so with Berlusconi's daughter Barbara and the Berlusconis pay according to him). He serves a brief jail term for his antics but exits with a business strategy (which includes a merchandising scheme, a website and a roster of planned appearances) more popular than ever posing in clubs and making celebrity appearances.

Our amateur singer Ricky is desperate to appear on TV, in any way, despite limited talent and moderate intelligence and whines about how easy it is for girls who want to do the same for the obvious reasons.

Lele Mora, talent agent and friend of Berlusconi, idolizes Mussolini, and cheerfully displays for the interviewer a video montage of fascist symbols, head shots of Mussolini and swastikas while entertaining a menagerie of TV celebs including Big Brother (Il Grande Fratello) contestants at his lavish villa funded by his success as a casting agent for TV celebs.

What a way to end the festival! If anyone is searching for signs of the impending apocalypse, look no further than the Italian media and the last shot of the camera lingering on a group of humping, gyrating teenage girls and young women who are auditioning for a role as a velina.

TIFF of the day: "The trailer for Videocracy shows scantily dressed women and provides statistics about restrictions on press freedom. Italian public broadcaster RAI and Berlusconi's Mediaset channels have refused to air it ... the reason given for rejecting the trailer was that it was offensive to Berlusconi's reputation." Source: aidanmaconachyblog.blogspot.com
Posted by A Lit Chick at 8:55 PM