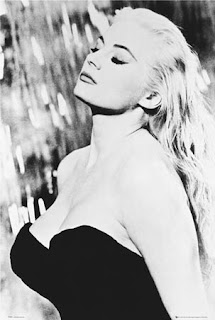 I have not seen this film for many years but my memory of it is so different ... In my memory I thought of Marcello Rubini (Marcello Mastroianni), the tabloid journalist, as sophisticated, passionate, very cool ...
Rome is as beautiful as I remember (who can forget Anita Ekberg as the movie star Sylvia cavorting in the fountain of Trevi?); however, you see much that is not beautiful in the city and the people. The city sometimes appears ravaged by war but it is perhaps "only" progress; everywhere, there is new construction, debris, changes; perhaps this is best epitomized by the opening shot. It shows the removal by helicopter of a religious figure carried over the head of four bathing beauties to some new location. What is it meant to say: nothing is permanent? Everything is negotiable?

Upon viewing the film again I am surprised by how disturbing and cynical the Marcello Rubini character is. He is selfish, shallow, his face is so worn and anxious - pursuing Sylvia, the dream woman/sex goddess although he is also involved with the troubled Emma (Yvonne Furneaux) who alternately succumbs to him, harangues him, tortures him with her fierce needs.

Sylvia is childish, irresponsible, beautiful and Marcello is smitten, following her around like a lovesick puppy murmuring phrases in Italian that she doesn't understand. They are shadowed by the ever present paparazzi (note: here is the origin of the word - based on a photographer named Paparazzo (Walter Santesso) in the film).

Marcello's life is sad, not glamorous, as I mistakenly remembered it. He lives in some dreary newly constructed subdivision - a symbol of progress or a symbol of the new world destroying the old? - in Rome with his lover, portrayed here as an unhappy, suicidal harpie-like figure yet he continues to anxiously cavort with the wealthy Italian aristocracy, people like Maddalena (Anouk Aimée) who seems as unhappy and lost as he does, engaging in fruitless encounters, violent affairs and bizarre adventures in their beautiful but decaying palazzi.

Even Marcello's father, played by the charming Annibale Ninchi, who comes for a short visit to Rome appears to be almost overcome by all he sees, although initially he seems aroused and stimulated by the beautiful girls whom Marcello surrounds himself with. After an episode where he feels unwell late into a night of carousing he disappears quickly and leaves Rome for home as if to say he knows this is not the place for him.

Perhaps one of the first modern films to analyze celebrity, the desire for fame, with a critical eye ... Fellini's razor sharp eye for satire picks apart a scenario where two children, dressed to the hilt, pious heads bowed, claim to have seen the Madonna and lead the public and the press in a wild goose chase, running from one spot to another on a ravaged landscape shrieking "There she is! There she is!" until the frenzied crowd tears apart a tree, literally limb from limb, to get a "piece" of the miracle.
Sometimes the jaded Marcello seeks solace from Steiner (Alain Cuny), an older, very learned friend, who appears to have it all, including the answers to life's troublesome questions - a beautiful wife and two exquisite children, a palazzo of great beauty, wealth, intelligence, culture, exposure to interesting, intriguing, artistic people ... yet it is Steiner who commits a horrible act of rebellion against life at the end as if to say it all meant nothing to him.

This is a turning point for Marcello who degrades himself even further it appears, becoming a P.R. person for the people whom he used to chase around to write his tabloid stories and whom he overtly despised.
In the famous last scene on the beach (copied by many such as American director Woody Allen in Stardust Memories) he is beckoned by a beautiful young girl to cross over a short island of water and join her - is she real? Is he drunk and merely imagining this vision? But he can't, he is incapable - he recedes back into the clutches of a group of the spoiled, unpleasant, drunken mob that he has spent the night with, withdrawing with a great deal of self-loathing. He is incapable, or unwilling, to cross over and meet the girl who remains behind smiling at him sweetly.
Three extreme archetypes of women appear here: the childlike sex kitten incapable of a mature relationship (Sylvia), the overbearing spouse/mother figure (Emma) who seems to wish to devour the male, and the unapproachable virginal innocent who offers salvation in the last scene.

I wish I could say that things have changed ... but have they? Are we (women) still not often categorized into one of these three archetypes? I'd say we are for the most part.

Still, Fellini's tortured protagonist Rubini challenges and enthralls.
Posted by A Lit Chick at 7:16 AM