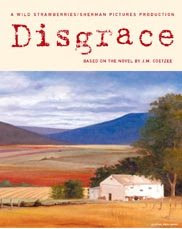 My last film for this festival ... I enjoyed it despite losing an earring and spilling my entire cup of coffee all over myself and on the floor in front of me. I was chatting with the woman behind me; she had seen 45 films - lord my head would have exploded - those days are well behind me (not that I ever saw 45 films at the festival).

I begin and end the festival with a film featuring John Malkovich.

Based on J.M. Coetzee's book of the same name, it features the ever present John Malkovich. He has been busy with three films at the festival. Here he plays David Lurie, an arrogant yet lonely professor of romantic literature at a university in Cape Town; he is also a loathsome lothario preying on his students and finessing young girls with good wine, classical music and the romantic poetry of Byron. His last sexual affair goes wrong and the girl files a complaint against him at the university. Although not coerced, she appeared unwilling and faintly disgusted by the whole process even though she submited to his advances.

Losing his job and stalked by the vindictive and potentially violent boyfriend of the girl, he fancies himself some sort of Byronic hero. He admits to his involvement but refuses to apologize for his actions and leaves Cape Town. He decides to visit his daughter Lucy (Jessica Haines) who lives on an isolated farm in the Eastern Cape. There is a lot of blather about men following their impulses and such which will eventually bite him in the proverbial you know what it turns out.

Lucy co-exists happily with Petrus, a black farmer with ambitions to improve the property that he co-owns with Lucy. Lucy's laid back live and live philosophy is severely tested when she and her father are attacked by three black youths, one of whom it turns out is related to Petrus by marriage and eventually comes to live with Petrus.

Lucy's liberal guilt is maddening to witness. She feels compelled to leave things as they are even though they have both been horribly violated and she will have to live with the consequences for the rest of her life. She even submits to some humiliating conditions in order to preserve her way of life and keep the peace.

To say more would ruin the story but it seems that Lucy's resignation to the violence of men and the consequences of those actions prompts David to re-examine his own disreputable behavior and impulses. He undergoes a transformation of sorts, perhaps growing up for the first time and realizing that although he is less evil than the three boys, his own actions have created perhaps irreparable harm to those around him.
Posted by A Lit Chick at 1:07 PM

I've loved your coverage of TIFF! Thanks!

Thanks Maria. I had a great time this year!