Day 7 at Disney World: At a Premium 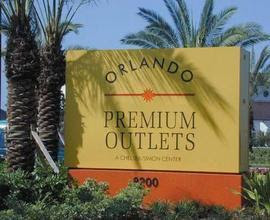 Bad start to the day ... J with a stomach ache and not in a good mood (Disney overdose perhaps? This has occurred to me). Stupidly, I try and cajole her out of it, which is silly to say the least, and then get upset when she doesn't come around. My s-i-l has persuaded us to go to the Premium Outlets Mall outside of Orlando. Pretty fancy stuff here: Ann Taylor, Barneys New York Outlet, Burberry, Coach, Diesel, Fendi, Gap Outlet, Giorgio Armani, Kenneth Cole, Lacoste, MaxMara, Nike, Polo Ralph Lauren, Salvatore Ferragamo, Theory, Tommy Hilfiger ...

I am not a good shopper usually. I hate malls, I am stubbornly cheap at times and impatient with crowds and other shoppers. This is not a good mix but she has persuaded me so the three of us adults and my niece venture out. R stays with the ailing J with the hopes that she will come around and they can get a bit of fresh air at the pool. I must admit, this was a good mall as malls go ...

For R because I felt guilty that he was at the hotel: Calvin Klein Summer cologne. He was "forced" to give up any kind of scent when I was pregnant with J as it made me very ill. Strong scents had that affect on me, pleasant or otherwise. The spouse still brings this up but, hey buddy, that was TWELVE years ago. Let it go. A special anniversary gift which will remain undisclosed for now.

For la famiglia: two pieces of sleek, silver Samsonite luggage as we have been dragging around these ugly godforsaken cloth pieces of luggage for the length of our marriage (again not to be disclosed here) which we received as a wedding gift.

For J: orange flip flops from Diesel - but there is a lack of cool stuff for funky daughter; perhaps mother did not look hard enough? Everything looked too girlie for my girl.

I could have shopped for more but I wearied. I had reached my shopping limit after 2 1/2 hours which is pretty good for me and I felt uncomfortable about J being ill and at the hotel.

When I returned all had been forgiven despite my snappish behavior. We spent the rest of the day by the pool and had dinner at the Riverside Resort. We raced to Downtown Disney by boat to catch a viewing of Wall-E at the AMC Theatre and then raced back to the boat to catch the last 11.30p.m. boat. Just barely and met a lovely family from Orlando who told us stories as they have been going to Disney for years. The worst was an anecdote about a Mickey Mouse character smacking a whining child in a line up then getting back in line to talk to the other kids. Ai yi yi ... There was also another story about their boys swimming with Lindsay Lohan at a hotel pool when she was shooting in Orlando (she was twelve).

The river was dark and moody. Florida vegetation is so lush, so beautiful, but I could not withstand these temperatures for long.