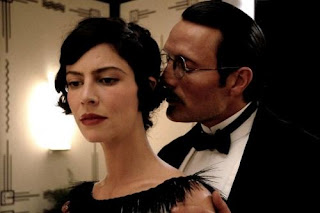 Call the newspapers! Beautiful, brilliant, successful people often behave abominably in the service of their egos and their art. Someone pass me the smelling salts please ... unkind ALC, unkind. I actually quite enjoyed this film.

The famous fashion designer Coco Chanel's (Anna Mouglalis) infatuation with Igor Stravinsky (Danish actor Mads Mikkelsen, better known as the villain from the new James Bond franchise) begins when she attends the premiere performance of Stravinsky's The Rite of Spring. The revolutionary work creates a sensation, generating equal parts derision and praise as well as a near riot in the theatre. Coco is hooked. And so are we.

Who is this man that incites such passion in the audience? The work is tumultuous and new, indecipherable, threatening sounding but appealing too. See the beginning of the ballet choreographed by Nijinsky recreated here by the Joffrey Ballet and tell me what you think ...

Shortly after World War I ends, the two meet again in 1920. Igor, a native Russian, is now a destitute refugee living in Paris after the Russian Revolution in 1917. Coco offers the impoverished composer, his wife and four children a temporary refuge in her country mansion Bel Respiro in Garches. It is not a proven fact but a rumor so the script has to do with the imagined sexual relationship between the two artists.

Katerina Stravinsky, Igor's wife (Yelena Morozova), who is not well, and, it is implied has made herself ill at the service of her husband's needs as a musical genius and bearing their four children, watches with sadness and a sense of impotence as the two dance around each other, an intimate dance of foreplay before they consummate their relationship.

This is a mature adult love triangle portrayed realistically. Coco operates without guilt but with a genuine respect for Igor as a musical genius. Stravinsky is portrayed sympathetically, as both a devoted father and committed artist struggling between his desire for Coco and his obligations as a husband and father as well as to his art.

He does not see Coco's contribution to culture to be as great as his own, hurling the epithet "shopkeeper" at Coco during an argument. But she understands who holds the reins of power and it is not him but Coco who is both independently wealthy and unfettered by responsibilities and emotional ties. She understands too well that he is able to produce art at her expense. Katerina is dismayed by the turn of events but her primary concern appears to be that Igor continue his music at all costs.

The costumes, the decor, Coco's mansion, all are exquisitely designed and shot here. The mansion itself bears her signature colors of cream and black and her unique designs. The film tries hard to equate Coco's perfectionism and the development of her fashions and the now famous No. 5 perfume as being as exacting and challenging as Igor's compositions.

TIFF of the Day: As history shows, whether the relationship was real or not, the two were not meant to be together. Coco went on to a succession of lovers most notoriously with Hans Gunther von Dincklage, a German officer and Nazi spy, during WWII. Save for the intervention of the British Royal family she would have been charged with war crimes.
Posted by A Lit Chick at 11:51 AM