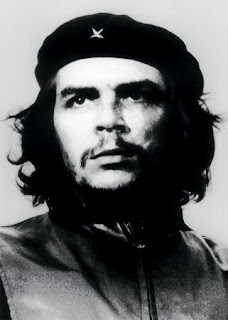 I couldn't resist using this iconic image. It's still incredibly powerful isn't it? It's little chilling looking at actor Benicio Del Toro in his Guevara garb in the film ...

Clearly director Steven Soderbergh worships at the altar of Che as do many left of centre artists and politicos. Ariel Dorfman had an interesting article in Time on Che and his enduring image (both visual and political). Che is, as they say, ubiquitous appearing on T-shirts, purses, book covers, coffee mugs. Forgotten is the complexity and darkness that was also a part of the man and as the article reminds us: "This erasure of complexity is the normal fate of any icon."

The simplest examination of the man's life will reveal Che to be extraordinarily humane, brave, articulate, respectful of women and protective of children, literate, fair, virile, handsome, loyal ... But Che was also the one who ordered prisoners executed without a fair trial in Cuba and killed deserters from the Communist cause on the spot.

The film is ambitious and adheres to history, it seems, accurately, perhaps too much so. Ernesto Guevara, an Argentine doctor, is invited by Fidel Castro to try and overthrow Fulgencio Batista in Cuba. They do so with a small rag tag group of guerillas that conquer the island region by region. Often they are abetted and cheered on by the campesinos themselves.

He achieves international fame or notoriety, speaking before the UN, being feted and adored int the West and everywhere he goes it seems. This is the first half of the film. In the second half, it is the mid 60s and he "disappears". He leaves wife Aleida and children in Cuba to go to Bolivia in disguise with a false passport to foment revolution but his reception is at times indifferent or openly hostile. He is perceived as a foreigner and troublemaker. He fails and dies for his efforts when caught by Bolivian troops. Reputedly, he was shot and then had his hands cut off as if, Dorfman points out, to minimize his power even further in the grave.

This is an extremely brief synopsis of a long film filled with historical detail - too much detail - we needed more exposition about what drove this man, what created what he was.

I remember watching Walter Salles' The Motorcycle Diaries (2004) and crying throughout it because I felt I had finally understood what drove this man to become a revolutionary. In the film, Che says something to the effect that he had seen too much and could no longer be the same person that he was. That quiet film, where two adventurous boys travel through South America on motorcycles and finally see, truly see, how other South Americans are suffering, are dying because of the evils wrought upon them by the state and corporations and the general indifference of their countrymen was infinitely more moving than this film where we see violent death and destruction dozens of times.

What is lost is the essence of the man. This is hagiography not a biography. He was a son, a friend, a lover, a husband, a father ... Yet he remains a beautiful icon much like the gorgeous photo we see here - pure without flaws or ugliness, only beneficence and valour. And for that reason specifically I think Soderbergh has failed with this film.

Not that it is not immensely appealing in its presentation, that it isn't fascinating to dwell on what he did and where. But why is it so?

From Ariel Dorfman again:
Perhaps in these orphaned times of incessantly shifting identities and alliances, the fantasy of an adventurer who changed countries and crossed borders and broke down limits without once betraying his basic loyalties provides the restless youth of our era with an optimal combination, grounding them in a fierce center of moral gravity while simultaneously appealing to their contemporary nomadic impulse. To those who will never follow in his footsteps, submerged as they are in a world of cynicism, self-interest and frantic consumption, nothing could be more vicariously gratifying than Che's disdain for material comfort and everyday desires. One might suggest that it is Che's distance, the apparent impossibility of duplicating his life anymore, that makes him so attractive.
Posted by A Lit Chick at 6:28 PM