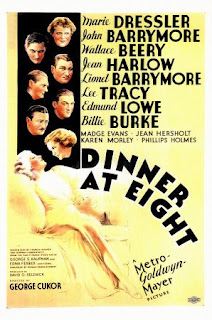 I can't remember when R and I first saw this film together (I think it was at the delightful but now vanished St. Mark's Cinema in the 1980s in New York) but I remembered being absolutely delighted with it, especially with Jean Harlow's performance.

She is the only one I can watch in that film today and not wince doing so. The other actors are so preoccupied with Acting, with a capital "A", that it's almost painful to see. An unrepentant bad girl on screen, she is true to form as Kitty Packard, an uncouth little tart who squanders her husband's money and fools around with her doctor.

Directed by George Cukor, a virtual god in the pantheon of Hollywood film directors (The Women (1939), The Philadelphia Story (1940), Gaslight (1944), Born Yesterday (1950), My Fair Lady (1964) and many, many more wonderful films), it's wonderful to see that this film was made only three years into a long, exemplary career. The film was based on the Broadway hit by George S. Kaufman and Edna Ferber.

Millicent Jordan (Billie Burke), an upper crust society hostess, is planning a dinner party and nothing will go right for her.

Among the guests are Dan Packard (Wallace Beery), a rough and tumble, power hungry, nouveau riche millionaire who is trying to get his hands on the Jordan shipping empire run by Millicent's husband, an ailing and largely ineffectual scion of the upper classes named Oliver Jordan (Lionel Barrymore). Jean Harlow is Packard's scheming but soft hearted wife with high society aspirations.

Their daughter Paula Jordan (Madge Evans) is having a secret affair with another dinner guest, failing movie icon Larry Renault (John Barrymore, aka "The Great Profile") who is on the skids with an alcohol problem, an enormous ego and, unfortunately, almost as much make up as Harlow.

Then there is the aging actress Carlotta (Marie Dressler), who leeches off the wealthy guests, in particular her former flame Oliver Jordan. Dressler, hailed as a comic genius at the time, doesn't fair so well with her mugging and vaguely Frankensteinish demeanor. I have never understood the appeal of this actress.

The dinner all threatens to go awry: one invited guest commits suicide; Oliver Jordan's business is threatened by Packard and a mysterious ailment which he refuses to divulge to his family; Kitty's philandering doctor/lover is discovered by his wife; servants have their own lives and inconsiderately intrude with the preparation of the menu.

However, the dinner will be served at eight.

The film script by Herman Mankiewicz, Frances Marion, and Donald Ogden Stewart is funny and irreverent and quick and even the dreadful mugging of the Barrymores, Beery and Dressler cannot ruin it.
Posted by A Lit Chick at 11:15 AM

Dinner at Eight is worth watching. But what type of film is this supposed to be? It's a comedy. It's a melodrama. People fall on stairs. Dogs make messes of hotel carpets.

I liked more of the performances than you. Harlow started off as grating with her childlike voice. But what type of film is Dinner at Eight supposed to be? Comedy? Drama? Melodrama?