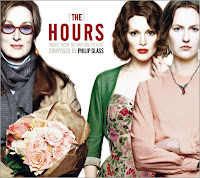 The Hours (2002) directed by Stephen Daldry

A book of early essays by Virginia Woolf, which I recently discovered, made me think of this film again which I saw for the second time. Those that worship at the shrine of Woolf are a rabid lot. Hence, I approached this film, and the book The Hours by Michael Cunningham that it was based on, with a certain skepticism which is entirely unfair.

The book, inspired by Woolf's life and the novel Mrs Dalloway, felt slight when I first read it (perhaps that was a harsh assessment) and there is always that unreasonable scoffing assertion on the part of the Woolf admirer - how dare you tackle Woolf, try to emulate her, replicate her, in homage, or otherwise? But why shouldn't he? Everything is fair game for a writer. Cunningham has the right to write whatever he wants; we have the right as readers to judge it fairly.

So the film ... let's just talk about the film.

The film blends the three stories of three women: Virginia Woolf (Nicole Kidman), Clarissa Vaughan (Meryl Streep) and Laura Brown (Julianne Moore). VW's story is well known. Here she struggles to write her novel Mrs. Dalloway. We see her in the village of Richmond where she lives with her husband Leonard Woolf (Stephen Dillane) and entertains her sister Vanessa Bell (Miranda Richardson) and her children. She muddles through domestic issues with her servant Nellie, struggles to formulate the plot of Mrs Dalloway, debates internally about what will happen after we die. Clearly, the script sets the stage for her imminent demise.

Clarissa Vaughan, a upper crust Bohemian book editor in New York in 2001, whose story emulates that of Clarissa Dalloway planning her party in the novel, is also organizing a party to honour her friend the poet Richard Brown (Ed Harris) who has just won a prestigious prize for poetry. He affectionately calls her Mrs. Dalloway presumably because of her first name and the fact that she is "always giving parties to cover the silence". Richard has HIVand his health is poor; he struggles with his own inner demons and suicidal impulses. He faces the prospect of the party with dread as does Clarissa who has a presentiment of disaster.

The third woman is Laura Brown, a suburban housewife in L.A. in the 5os, pregnant with her second child, and with the care of a small son (a younger version of the poet Richard seen in earlier scenes). She is clearly unwell, barely managing her depression and her own sense of helplessness, as evidenced by her faltering attempt to bake a cake for her husband (John C. Reilly) on his birthday. She is overwhelmed. The impression is that for her depression is an ongoing problem. She decides to drop off Richard and check into a hotel with her own copy of Mrs. Dalloway where she plans to kill herself.

All three seek escape ... Virginia from her daily pain and internal anguish, Clarissa from her fears about Richard's instability and her suspicions that she leads a life of triviality, Laura from her depression and a stulifying suburban existence. In each, a sensitive individual manages, sometimes unsuccessfully, with their depression.

What I didn't realize until this viewing is that each segment of the three part story has a variation of the character of Septimus Warren Smith, the wounded. suicidal WWI soldier in Mrs. Dalloway: Virginia, Richard and Laura. Only Laura is spared, but just barely. In a way these characters are all a variation of Woolf or, at the very least, a physical manifestation of her mental anguish.

Initially disappointed with the film, I see it more objectively now. It has many moments of beauty and sensitivity with a haunting musical score by Philip Glass. Despite the hubbub about the prosthetic nose Kidman wore (no wonder Kidman was annoyed at that attention), Moore's somewhat somnambulistic performance and the presence of John C. Reilly who always manages to annoy me for some reason, it succeeds wonderfully.

It conveys the sense of the times (the 20s, 50s, bohemian upper class New York) so convincingly; the eras are portrayed so simply and effectively. The little Virginia Woolf in jokes entertain ... Richard hears voices in Greek (as did Woolf in the early stages of her madness), Clarissa Vaughan ends up living with Sally Seton (in the book it is an exciting youthful lesbian dalliance which comes to nothing for Sally marries and has a number of sons), the actress Eileen Atkins, who has famously both portrayed and written theatrical pieces about Woolf , appears in the flower shop as the flower seller.

Little touches like that impress the skeptic in me.
Posted by A Lit Chick at 11:00 AM