Brando for the Summer 3 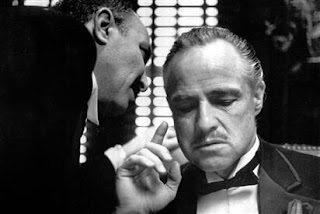 I have to admit that I am a Godfather fanatic, having seen the first and second films of the trilogy at least a dozen times. It was the only film that I ever saw my frugal Sicilian parents pay admission for in the 70s. Jokes about the interest of a Sicilian family in a Mafia film aside, I think they were particularly drawn to the fact that one rarely hears the Sicilian language on film. There is no written Sicilian. Children are not taught Sicilian in Sicily; they learn a northern dialect which has become the "official" language of Italy after unification in the 19th c. Most Sicilians speak their dialect and "proper" Italian. But that's a discussion for another day.

But there were other things that struck a chord, as a person of Sicilian descent, when I saw it: the importance of familial loyalty, the secrecy, the subjugation of women and children to the patriarch, first Vito Corleone (Brando) and then Michael Corleone (Al Pacino), the strong sense of vengeance that the family felt when wronged.

It seems redundant to reiterate the plot, it is so embedded in popular culture now: the phrases (see below for a taste), the plot, the physical appearance of the characters. So many phrases have become part of our pop culture heritage:

Luca Brazzi sleeps with the fishes.
I'm gonna make him an offer he can't refuse.
We're going to the mattresses on this one ...
Drop the gun, grab the cannoli.
I know it was you Fredo, you broke my heart. You broke my heart.
Everytime I try and get out they keep dragging me back in.
Never tell anybody outside the family what you're thinking again.

Brando, as head of the Corleone family, excels in portraying both a ruthless man and a man of great sentiment. All great mafia films and TV series (especially The Sopranos) hearken back to The Godfather (1972). It's hard to believe that Brando was only 48 in 1972 (he was born in 1924) when he played Don Vito Corleone a man who was meant to be in his 60s. Francis Ford Coppola talks with wonder of how when they met to speak about the role, Brando began to improvise saying "I see this man as a sort of bull dog" and he took pieces of cotton and stuffed them into the side of his mouth to illustrate the look that he thought was right. He began to speak in that raspy voice that he has now made famous.

Shocking to think now how much Paramount Pictures did not want Brando (or Pacino for that matter) as he was considered flighty, too expensive, unreliable, could not memorize his lines and a huge insurance risk. All realistic doubts at the time.

The script is so brilliant, co-written by Coppola and Mario Puzo, that it's hard to separate the talents of Brando from the writing. But you can see his dramatic transformation of the Don at the height of his powers at his only daughter's wedding: strong, decisive, powerful. And then the man he becomes after he is shot, nearly murdered by his rivals, and especially after his son Sonny (James Caan) is murdered. He is more lethargic physically as if he carries a great weight now; he is more tentative, fragile almost, as he turns over the reigns of power to his beloved son Michael.

The little tricks Brando uses to show the complexity of the man: the stroking and petting of cat even while he plots the mortal demise of his enemies, cavorting innocently with his grandson, amongst his tomatoes, dancing tenderly with his daughter at the wedding, insisting that the photographer wait for Michael to take the family portrait at the wedding.

It is the same brilliant character acting you see in The Sopranos: yes, these are reprehensible murderers who kill their enemies, extort, deal in prostitution, cheat on their wives, but Brando is still able to elicit our sympathy, our admiration for his fidelity to wife and family, to a certain set of core values.
Posted by A Lit Chick at 7:39 PM

Your blog keeps getting better and better! Your older articles are not as good as newer ones you have a lot more creativity and originality now keep it up!

Thanks for your essay on the Godfather. I have a ver similar experience. My parents also went to see it, not so much for the Mafia story, but for the Sicilian dialect.

It's like my husband says, every time it's on TV we are mesmerized and can't turn away. It's that good.