Visiting Mrs. Nabokov and Other Excursions 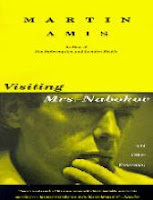 I snapped up this book immediately at a used book sale this fall at the university where I work. The title and author were enough for me even though the essays/articles date back to the 80s and 90s ... Amis' bad boy charm and razor sharp intellect have always been attractive to me.

When I was pregnant with my daughter, I suffered through the reading of The Rachel Papers, Amis' first novel, not because it wasn't any good (I thought it was a good first effort by a very young man) but because my sense of smell while pregnant was so intense that the peculiar scent of the old book, which had been passed through many hands at the library, almost undid me. But I soldiered on because I wanted to see what his first artistic effort would be like. And I'm glad I did.

I admit I have been selective in choosing which essays to read in this book, studiously avoiding the pieces on tennis, chess, poker and football (soccer to you and I here in Canada) or snooker with his former intimate and fellow author Julian Barnes (by the way this article predates their estrangement).

I was concentrating on the pieces on Graham Greene, John Updike, Madonna, V.S. Naipaul , the Rolling Stones, Salman Rushdie and, of course, the title piece "Visiting Mrs. Nabokov". He doesn't disappoint. He never does. He is always quick witted, erudite, acerbic.

One of my few complaints is that the pieces are sometimes too short but likely these are written according to the strict word counts of those newspapers and magazines that they were originally published in (The Observer, Vogue, Evening Standard, Tatler, etc ...). His razor sharp tongue seems to excel in deconstructing outsized personalities.

Read his assessment of Ronald Reagan's performance at the Republican convention in 1988 as described in "Phantom of the Opera: The Republicans in 1988" and his ruthless picking apart of the "mask" that Reagan assumed as the penultimate symbol of Republican royalty where he describes Reagan as "a gorgeous old opera-phantom shot full of novocaine".

Or read his clever summation of Madonna's artistic/mercenary motivations in producing the book Sex and the astute analysis of her success as being a triumph of will over talent.

Other pieces include Salman Rushdie living under the consequences of the Ayatollah Khomeini imposed fatwa, a long dissertation on Saul Bellow's More Die of Heartbreak, Naipaul's book on the ills of modern India.

It is a bit dated in the reading now but Amis is always a delight to read.
Posted by A Lit Chick at 3:41 PM