Putting on, and Taking off, the Red Shoes

Perhaps the screenwriters, the director Michael Powell and Emeric Pressburger, did not propose for the film to have the profound meaning that it would have with feminists and female artists in years to come. And yet it still does...more than sixty years later. It remains beautiful to look at despite the frightful melodrama of the acting; it still strikes a chord with many women.

We still have conflicts between dedication to one's art and relationships with the people we love. This is not an analysis of the film but an examination of the issues it raises for women and art.

﻿Such women, and such sacrifices (primarily for love), abound in art... Anna Karenina ultimately kills herself because she realizes that she has sacrificed her relationship with her child, her marriage, her financial security, for her lover Vronsky who has, very likely, tired of her and their romantic passion. In La Traviata, the courtesan Violetta sacrifices her love for Alfredo because she does not want to destroy his life and reputation. Jane Eyre gives up her independence to care for the wounded, blinded Rochester for love. In the House of Mirth, rather than ruin the reputation of Lawrence Selden, the man she loves, by producing letters which prove adulterous relations between himself and Lily's nemesis Bertha Dorset, Lily destroys the letters and buries her own reputation ultimately leading to her public disgrace and suicide. Isabelle Archer remains with her abusive husband Osmond in order to protect her step-daughter in The Portrait of a Lady.

These stories have enormous power. But far fewer stories exist about one's dedication to and sacrifice for one's art.

I wonder if it is still perceived as a selfish to be committed to one's art as a woman? Would you condemn me if you heard me say (with some exasperation) to my husband and child that I needed to be alone so that I could write. I think you might...and if I spent the odd night or afternoon volunteering or socializing with fellow writers rather than doing another load of laundry or supervising homework on a Wednesday night would that be off-putting to you? Is it my duty as a woman, wife and mother to always put my loved ones before my artistic and social interests?

In the film, Victoria 'Vicky' Page (Moira Shearer) is a beautiful, unknown dancer with an aristocratic background who aspires to dance with the prestigious Lermontov Ballet (loosely based on Diaghilev's Ballet Russes). She meets Boris Lermontov (played very bitchily by the German actor Anton Walbrook), the charismatic impresario of the Ballet Lermontov, who tauntingly questions her about her devotion to ballet before he sees her dance:

Vicky is as compelled to dance as we are compelled to write, to paint, to sing, to act, to live. Intrigued by her saucy answer, Lermontov takes her on as a student. He sees her dance in a performance of Swan Lake in a small, modest venue and realizes her potential. Vicky is then invited to go with the company to Paris and Monte Carlo and when Lermontov loses Irina (Ludmilla Tchérina), his Russian prima ballerina (she wishes to marry - apparently it is impossible to think that she could possibly do both), he begins to see Vicky as a possible successor.

Lermontov pronounces: "A dancer who relies upon the doubtful comforts of human love will never be a great dancer. Never." When someone notes that you cannot change human nature, Lermontov snaps, "I think you can do even better than that - you can ignore it."

Lermontov creates a starring role for Vicky in the new ballet, The Red Shoes, written by a new young composer named Julian Craster (Marius Goring) which is based on an old folk tale by Hans Christian Anderson. In the ballet, a young girl becomes enchanted with (and enchanted by) a magic pair of red shoes which permit her to dance and dance but the trick is that she is unable to stop dancing even when she wants to. In desperation, she even tries to cut the slippers off her feet but to no avail. The only way that she can stop dancing is by dying, with the slippers on. Prophetic and true for some (many) women.

Vicky and Julian as the composer tussle artistically then fall passionately in love during the creation of the new ballet. The ballet is a tremendous success and Vicky is a star. Lermontov becomes enraptured with Vicky and her talent.

Lermontov: When we first met...you asked me a question to which I gave a stupid answer, you asked me whether I wanted to live and I said "Yes". Actually, Miss Page, I want more, much more. I want to create, to make something big out of something little – to make a great dancer out of you. But first, I must ask you the same question, what do you want from life? To live?
Vicky: To dance.

Accordingly, because Lermontov sees that Vicky aspires to the same high standards as himself, Vicky is placed in the lead roles, but all is not well with Lermontov. When he learns of the relationship between Vicky and Julian, he is angry with Julian for "distracting" Vicky from her dancing and confronts Julian. Julian refuses to end the affair and is fired. Vicky promptly quits (for a woman it is always love before art). The couple marry and move to London where Julian begins a new opera. Score one point for love, zero for art.

With some reluctance, because Vicky is still under contract, Lermontov permits Vicky to dance for other companies but the one exception is performing The Red Shoes as Lermontov still retains the rights to the ballet and Julian's music. He will not permit any company to mount it again nor allow any other ballerina to dance the ballet. But he is tortured by his decision and by Vicky's talent which if he doesn't relent, he will never see her perform again. He finally relents and Lermontov convinces Vicky to return to dance in a revival of The Red Shoes.

On opening night of the revival, Julian appears in her dressing room. Perversely, he has left the premiere of his own opera at Covent Garden to convince her to go back with him to London. Lermontov finds them together and the men confront each other.

Julian: You're jealous of her.
Lermontov: Yes! I am. But in a way you'll never understand.

It is beyond sexual desire although I think there is a tinge of that here. It encompasses a desire to possess and control Vicky's considerable talents.

Vicky cannot decide what to do. Julian, crestfallen, leaves for the railway station, and Lermontov consoles her with this: "Sorrow will pass, believe me. Life is so unimportant. And from now onwards, you will dance like nobody ever before."

While wearing the red shoes on the way to the stage, Vicky frantically runs out of the theatre towards the railway station. Julian runs towards her. Overtly, one is reminded of the fate of Anna Karenina when Vicky jumps and falls in front of an approaching train. While she is dying, she asks Julian to remove the red shoes. The performance continues without her with a spotlight representing the missing ballerina. It is tragic but art forges on with or without you...

These were/are our choices then and now? Rejecting one's Art = death? Love = the lack of pursuing one's passion in one's life? And yet despite the tragic ending, this film resonates. Are we in love with the fantasy of giving up everything (art, independence, freedom) we value for love? Yes, masochistically, sometimes we are. 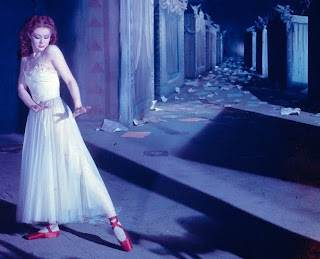