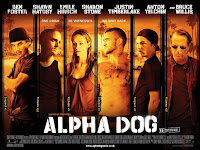 Alpha Dog (2006) is based on the 2000 real events of drug dealer Jesse James Hollywood's (Emile Hirsch as Johnny Truelove) malicious conniving to kidnap and kill 15 year old Nicholas Markowitz, here named Zack Mazursky, who was the brother of a former friend/meth addict Jake Mazursky (Ben Foster), in order to eradicate a debt. The story is both too obviously done and thoroughly chilling in its details. Not as exploitative as Kids (1995) directed by Larry Clark. which seemed to revel in the sexual activities and mindless violence of underage kids, it comes a bit too close to achieving the same sort of effect.

Nick Cassavetes' film is shot like a documentary with a "filmmaker" asking questions off screen, the principals labeled on film and chronological timelines indicating how the events transpired which lead to the death of Markowitz. It opens with "home movies" of what the viewer presumes to be the young men as boys set to a melancholy rendition of "Somewhere Over The Rainbow". The message is clear, they start off so sweetly, then look what they become ... Apparently Cassavetes was inspired by the fact that his two daughters went to school with some of the boys involved.

More explicit "message" commentary comes from Sonny Truelove (Bruce Willis), father of Johnny Truelove, in which he implicates all the parents for the whole affair. The irony quickly reveals itself. Sonny is the main supplier for Johnny's drug trade and a minor criminal himself. His criminal activities fuel Johnny's. Sonny's "mentor" Cosmo (Harry Dean Stanton) is a semi-literate drunk. Apples and trees, apples and trees ...

Son Johnny Truelove is a malignant, vicious Napoleonic figure who orders about his crew of misfits and losers with an unquestioned imperialism in his drug empire. Elvis (Shawn Hatosy) is a none too bright lackey who, it is implied, is in love with Johnny and will do his bidding without compunction. Frankie (pop star Justin Timberlake) is the son of wealthy botanist and lives in luxurious circumstances in Palm Springs yet hangs with Johnny and the boys in the Valley.

Jake Mazursky, who is Jewish, is often the target of the underlying hostility the mostly white crew feels towards him. When he fails to collect on a debt that is owed to Johnny, he must find a way to pay. Jake's father Butch (David Thornton), an affluent white collar professional with a second wife Olivia (Sharon Stone) and a young son Zack, is reluctant to get more involved in Jake's debts which accumulate with his increasing habit. Jake is unable to pay his debt inciting vengeful violence from Johnny's crew. Jake retaliates, trashing Johnny's house, stealing his TV, defecating in his home.

Zack, naive, coddled by a loving but over protective mother, wants to be like half-brother Jake and gets caught in the middle of the violent feud. Johnny, Frankie (a very well chosen Justin Timberlake) and Tiko (Fernando Vargas) are driving through Zack’s San Fernando neighborhood, accidentally spot Zack and snatch him thinking they can hold him until Jake pays up.

Jake refuses to make a deal with Johnny. The boys, at loose ends about what to do with Zack, portrayed here as endlessly sweet and innocent, end up allowing him to hang out, smoke pot, flirt and have sex with a succession of vacuous girls including Julie (Amanda Seyfried), watch “gangsta” videos (again fingered as one of the culprits int the events here) and offer him pretty much the best time of his young sheltered life at their various homes. Zack promises not to run away and why would he? Only Frankie's girl Susan (Dominique Swain) is momentarily horrified by what has happened and the consequences but when assured that Zack will soon be returned she relents and joins in the general party. Zack somehow believes that being held hostage will alleviate his brother's dire situation, assuaging Johnny's anger.

Johnny starts to panic about how to return Zack and asks a lawyer for advice, when told that he is looking at a life sentence for kidnapping he asks first Frankie and then Elvis to kill Zack. Frankie refuses but Elvis eagerly takes up the challenge. The highly publicized ending is well known.

So who or what had failed this boy? Indifferent or overly liberal parents, the effect of drugs, machismo gone haywire, gangsta video culture, rap music, take your pick ...

Sonny Truelove is a lowlife criminal. Butch Mazursky is too uninvolved in his boys' lives, Olive too involved, prompting Zack's departure. Frankie's father, though very wealthy indulges in drink, drugs and threesomes in front of Frankie. Susan's mother, high on Ecstasy, is too self-absorbed to talk to Susan when she comes to her mother for advice.

It's horrifying, repulsive, and completely compelling. Cassavetes does a more than credible job in portraying the culture that spawned these horrific events. However, I can't help feeling that despite the obvious horror that the filmmaker is trying to display there is an almost prurient interest in the lives of these kids.