Io Sono Amore (I am Love) 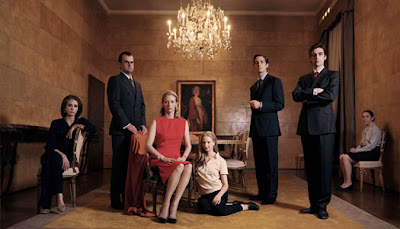 
Nominated for 1 Oscar:
Costume Design
How shall I describe this film? Hmm, it's like Flaubert's Madame Bovary meets di Lampedusa's The Leopard in 21st century Milan. The film opens with some beautiful but icy shots of Milan in winter. An apt metaphor for the Recchis, affluent Milanese textile manufacturers. Emma, the beautiful, elegant Russian-born wife (Tilda Swinton speaking tentative but flawless Italian) has a handsome and successful husband Tancredi (Pippo Delbono) - immediately one should be aware of shades of The Leopard here - and an array of gorgeous, intelligent, talented children. She seems to have everything: a stunning palatial home, wealth, success, beauty. Of course...something is terribly awry.

Later, the business titan who has purchased the Recchi company murmurs of one of the Recchis: "He understands that the world is growing and that it has to be changed...All one has to do is alter one's way of viewing it." This echoes The Leopard's proclamation by Tancredi that, "If you want things to stay as they are, things will have to change." Here, too, as in the Sicilian novel we have a man of wealth forewarned that his world is changing and he must adapt.

At a formal dinner party, the patriarch and founder of the textile dynasty Edoardo Sr. (Gabriele Ferzetti) is celebrating his birthday where he announces that he is passing on the reins of the empire to his son Tancredi and, unexpectedly, to his grandson Edoardo Jr. (Flavio Parenti).

During the dinner the younger Eduardo has a visit from Antonio (Edoardo Gabbriellini), a chef who defeated him in a race earlier that day, and who comes bearing a cake as a gift. Later we see that the two men have become friends and plan to start a restaurant together.

Emma accidentally discovers that her daughter Elisabetta (The Solitude of Prime Number's exceptional Alba Rohrwacher) is a lesbian, but keeps it a secret from her husband.

When Emma is having dinner at Antonio's restaurant with her mother-in-law and son Eduardo's fiancee it's as if she goes into a romantic trance tasting the food prepared for her by Antonio. A spotlight is focused on Emma, her face lights up, she practically swoons. It is the beginning of Emma's feelings for Antonio. While in San Remo, on her way to view Elisabetta's art exhibit in Nice, she encounters the aspiring restaurateur. At his invitation, she travels with him to his house in the hills. Their relationship begins.

The post-coital glow and dazed smile on Emma's face (perhaps she is named for that other famous Emma as I suspected) clearly hearkens back to Madame Bovary's exclamations after her rendezvous with Rodolphe. "I have a lover! A lover!"

Under the pretext of discussing a menu with Antonio for a business dinner to be prepared for her son Edoardo, Emma travels to San Remo and spends a day with Antonio. Interestingly, both daughter and mother do the same thing when they finally acknowledge their true desires - they cut their beautiful red hair short as if liberating themselves from the past and old ways. The attire changes and their whole demeanor changes - it is more modern, more androgynous - shifting from elegant dresses to casual pants, shirts and jackets.

Antonio prepares a soup dish at the planned business dinner, ukha, a Russian dish that Emma had described to Antonio during one of their trysts and which she had made for Eduardo Jr. as a child. After seeing the dish (and remembering that he found a lock of what resembled his mother's hair at Antonio's), Edoardo Jr. suddenly realizes that the two are involved. He storms out of the dinner followed by Emma. He stumbles and hits his head on the edge of the swimming pool, sustaining a cerebral hemorrhage and soon dies.

When Tancredi attempts to console Emma after the funeral she reveals that she is in love with Antonio.
Shocked and repulsed, Tancredi tells her, "You no longer exist."

Emma rushes back to the villa, changes her clothes and hurriedly tries to leave. She exchanges knowing glances with her daughter although they do not speak. Eduardo Jr.'s fiance stands in the doorway and clutches her stomach; she is pregnant - the Recchi empire will go on, with or without Emma.

During the credits, we see Emma and Antonio lying together inside a cave. Is this the only way their love may exist?