Not your kid's vampire movie ... 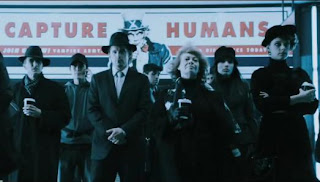 ***SPOILER ALERT***
I was pleasantly surprised by this film, expecting the usual cheesy gore and bad acting. But I saw a subtle undercurrent of intelligence and political awareness here which alluded to the way we deal with disease and with otherness and which could apply to race, sexual orientation or religion. The film is beautifully shot, a cross between the futuristic look of Blade Runner and a 40s film noir. I think it no coincidence that both films are set in 2019. This film seemed to have slipped under the radar with many audiences but it offers a brave and intriguing look at the persecution of humans who have become a minority in a society and serves as a metaphor for the persecution of all minorities or creatures under the heels of the more powerful.

The year is 2019, and a pandemic disease has resulted in the human population mostly turning into vampires, only five percent remain human. Those humans serves as a blood sources for the vampires but their numbers are dwindling. Combat troops (who are suspiciously attired like American troops in Iraq) capture humans who then are "harvested" much in the way a cow or a chicken is farmed - confined in high-tech pens and hooked up with tubes to dispense milk (in this case blood for vampire consumption). This scene struck me more forcibly than a hundred vegetarian diatribes about the exploitation of animals.

When the vampires are deprived of blood for long periods of time, they degenerate into violent, repulsive bat-like creatures called "subsiders" who exist primarily underground which we see brief glimpses of. So many associations come to mind: the manner in which we first treated AIDS patients and the calls by an extreme minority to isolate and quarantine them. The way we treat animals - capturing them, brutally killing them and/or exploiting them cruelly for food and sustenance in horrendous physical circumstances. The way aboriginal people have had their culture destroyed and has forced many of them on to the street.

Scientists Edward Dalton (Ethan Hawke) and Chris Caruso (Vince Colosimo) are hematologists who work for the pharmaceutical company Bromley Marks, the largest supplier of blood substitutes. They are feverishly trying to discover a synthetic blood substitute to sustain the vampires as the human population is dying out. The company is run by Charles Bromley (played by the delightfully sinister Sam Neill).

Edward refuses to drink human blood, feeding only on animal blood. He is at odds with his younger brother Frankie (Michael Dorman), a soldier who zealously captures humans for farming. Frankie was also the one who turned Edward. This world is a frightening futuristic nightmare where soldiers are retained by Bromley Marks, the largest pharmaceutical company in the U.S., which has a vested interest in capturing humans for harvesting.

When Edward accidentally encounters a covert group of humans led by Audrey (Claudia Karvan) who rescue and hide humans from vampire patrols he begins to respond to his already burgeoning guilt and resistance to the harvesting of humans. He enables the group to evade detection. Later Audrey contacts Edward and connects him with Elvis (Willem Dafoe). Elvis claims that he cured himself of vampirism by a process in which he exposed himself to sunlight while being thrown into water. And he wants to share this with other vampires who wish to turn themselves back.

Alison is soon captured by Bromley's soldiers during a raid and she is turned by Frankie at the request of her father Charles. She refuses to drink human blood but instead feeds on her own blood (as some vampires do) which turns her into a subsider. She becomes the crazed, degraded creature that all other subsiders become and eventually she is included in a round up and executed (much as many concentration camp victims have been in the past).

The scenes are so deftly constructed that they immediately remind you, subconsciously, of the worst excesses of human and animal slaughter - the killing of the Jews during the Holocaust, the ravages on the human body of the AIDS epidemic, the historical slaughter of indigenous peoples on every continent, the brutal slaughter of animals in the food industry.

Frankie, who was part of the round up, is traumatized by the killing of Alison and seeks out his brother.

Edward, Elvis, and Audrey meet with Edward's fellow scientist Chris Caruso asking for his assistance in spreading the cure but he has developed a more sophisticated blood substitute that could garner huge profits for himself and the company and turns on the group calling in the vampire patrol.
However, Chris has finally discovered a viable blood substitute and does not want a cure to become widespread. He calls in a vampire patrol which captures Audrey. Elvis and Edward are found by Frankie; Frankie wants to help his brother but he is slowly becoming a subsider and attacks Elvis. During the attack, they discover that the act of feeding on a former vampire is another cure for vampirism.

Edward goads Charles Bromley into attacking him - this cures Charles and then Edward uses Charles to cure a group of soldiers. When Edward and Audrey are trapped by more soldiers, Frankie sacrifices himself to the soldiers sparking a vampire frenzy which leaves the mass of soldiers dead or cured of vampirism.

I would not say that there is a happy ending...but there is resolution and a sense that those who have transgressed less have won.
Posted by A Lit Chick at 8:24 AM