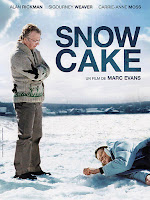 This film, Snow Cake, likely slipped under the radar for you (as it did for me) but was recommended to me by a friend, AM, who has a special interest in the subject matter. It is a UK-Canadian co-production written by first-time UK screenwriter Angela Pell and directed by British director Marc Evans.

Alex Hughes (Alan Rickman) is travelling through Northern Ontario on his way to meet the mother of his son in Winnipeg. He is captivated, or perhaps coerced depending on your point of view, by a quirky (some might say annoying) 19 year-old hitch-hiker named Vivienne (Emily Hampshire) who asks him to drive her to Wawa, Ontario to see her mother Linda Freeman (Sigourney Weaver).

Vivienne is unperturbed by Alex's understated proclamation that he is an ex-con who has killed someone. They drive on. En route, Vivienne dies instantly in a car crash when their car is struck by a truck. Shocked and emotionally distraught, Alex find himself in Wawa to seek out Vivienne’s mother and personally explain the circumstances of the accident. Here Rickman's usually dour demeanour works perfectly. He is in anguish not only because of Vivienne's death but what it reminds him about his own personal history.

Linda, it turns out, is autistic, albeit high-functioning. She appears, outwardly, unaffected by the news of Vivienne's death. He becomes involved with her orderly, carefully constructed world. Linda lives alone and her autism manifests itself in obsessive neatness and order with a strict adherence to rules and procedures. For instance, she cannot touch garbage, that is Vivienne's job. She begs Alex to stay until Tuesday so that he can remove the garbage to the curb when it will be picked up. He agrees to do this and also arranges Vivienne's funeral which Linda seems unable to respond to.

Alex soon becomes intrigued by Linda’s beautiful, independent neighbour Maggie (Carrie-Ann Moss) who has periodically attempted to help Linda, to no avail. Linda maliciously describes Maggie as a prostitute (she is not) which provides some awkward laughs after Alex and Maggie sleep together for the first time. Maggie is soon warned by a rival suitor, the local police constable, that Alex is an ex-con who has killed someone. Although concerned, she does not question the circumstances of the killing but waits until Alex reveals that he killed the driver of a car who killed his own son some years before.

Too many coincidences perhaps, although all three of the principals, Weaver, Rickman and Moss, are wonderful. It could have a more saccharine ending but does not luckily.

Some critics have commented on the "overly mannered technique" of Weaver as the autistic adult Linda. I honestly don't know enough about this condition to agree although I did feel that this was so at times. I am presuming that the representation of this type of autism is reasonably accurate as I have read that the screenwriter Angela Pell has an autistic son. There is, too, a little bit of the sentiment in the writing that "people who are different are magical!" that this critic derided. I find this sentitment disturbing in watching the film. Could it be that autistic people are like us, mostly not magical, but perhaps only periodically so?

But I would not go as far as the film critic Rex Reed in this assessment: Snow Cake suffers from the same faults that plague most Canadian films: It drones itself to death with the pace of a drunken ant, and the ending takes longer than to arrive than Christmas morning. And Vivienne's artistic quirkiness irks rather than enchants. But this is a little talked of world that most of us have next to nothing in experience with so it is intriguing, beautifully shot and worth a look.
Posted by A Lit Chick at 5:50 PM

As someone with first-hand knowledge of autism, I could easily pick apart the performance, but as anyone affected by autism will tell you, the disorder manifests itself in a thousand different ways in a thousand different people. Even if you're not a fan of Sigourney Weaver's performance, Alan Rickman is excellent. I thought the ending was a little too easy, maybe. I'm not sure that someone with autism would remember her daughter in quite that way, and it's just too easy to rely on a fantasy/dream to tell the story. I want to see her experience in the here and now in how she interacts (or not) with the other characters. Certainly worthwhile, though.

I wish we knew more about it and could say whether it was fair or accurate. However, I'm glad it serves as a starting point for discussion about autism.