The Not So Good Girl 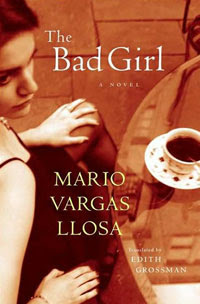 So I am finally tackling the Peruvian writer Mario Vargas Llosa whom I have been thinking about reading for some time. It seemed a great novel to start with. In The Bad Girl Llosa reworks Gustave Flaubert's Madame Bovary one of my favourite 19th c. novels. Other reviews cite A Sentimental Education (which I have not read) as the source. A review in the New York Times lead me to this book.

The story here begins in the 1950s with the 15 year old narrator Ricardo Somocurcio meeting Lily (whose real name is Otilia we later discover), supposedly a Chilean girl who has emigrated to Peru. Lily weaves a sensuous spell over Ricardo which is never dispelled even when she leaves Peru quickly and mysteriously. Lily is not Chilean but Peruvian and has masqueraded as a Chilean because she was poor - her crowd in Peru was much wealthier than she was, it was easier to "pass" this way. She takes on many guises/disguises during the course of his life in order to escape her poverty and indifferent fate.

Ricardo moves to Paris to work as an interpreter, a lifelong dream for him, and works for Unesco. He meets "Lily'"again and consummates his unrequited love for her.

She undergoes a series of transformations: firstly, she is Lily, the faux Chilean in Peru of the 1950s; then Comrade Arlette, the Cuban revolutionary in training in the early 60s in Paris; the sophisticated Madame Robert Arnoux (also the name of a character in The Sentimental Education), the wife of a French diplomat in the late 60s; Mrs. David Richardson, the wife of an aristocratic horse breeder in England in the 1970s; Kuriko, the drug smuggling mistress of a sadistic yakuza in Tokyo the 1980s. But how does she makes these incredible transformations, barely a mention of that ...

To my mind, the "Chilean girl" does not resemble the character "Emma Bovary" in the least. Obvious different historical circumstances aside, there doesn't seem to be a true emotional similarity. In my reading of Madame Bovary, Emma stumbles from one horrific sexual misadventure to the next because she is vain, shallow and superficial, yes, but she is also vulnerable, insecure and in search of passionate love influenced by her great love for romantic literature and music. She, and her family, pay the ultimate price for her foolish dalliances.

Emma is a weak, foolish woman but Flaubert makes her so real, so passionate that the reader cannot help empathizing with her foibles and romantic catastrophes.

Lily assumes guises and manipulates various men in her life to escape her poverty as Emma does to escape a stulifying, unsatisfying life under the thumb of her bourgeois family and then her interminably boring husband Charles Bovary.

But the "bad girl"in all her various guises never demonstrates vulnerability until very late in the novel and under very extreme circumstances which involve horrific violation and humiliation for her, almost cartoonish in its extremity and ugliness. She is thoughtless, rude, avaricious, mean but rarely vulnerable, sympathetic. It annoys me that the narrator rarely uses her name but always uses "the bad girl", "the Japanese girl", "the guerrilla fighter", etc ... But perhaps that is the point: that she has no real identity, that she is volatile and malleable.

Ricardo's attraction is indecipherable. Physical looks do not suffice as the sole reason especially as bodies age and desire wanes in middle age; a man does not chase a woman for 30 years solely for this. There is a lack, a weakness in Ricardo, which is never explored fully. The reader fails to understand the intensity of this emotion.

The sex scenes become hackneyed, routine in description. You are unable to comprehend Ricardo's ardour. There are one too many references to her "dark honey" eyes, her slender legs, her small form. She never materializes for me on paper. If she says that Ricardo tells her "cheap, sentimental" things in his expressions of love once, she says it at least a dozen times in the novel ad nauseum.

The novel cuts a broad, if unconvincing, swath across important historical circumstances: the Cuban revolution in the late 50s, the tumultuous political history of Llosa's native Peru, the "swinging" 60s in London, the onset of AIDS in the 1970s and the death of a close friend from that disease, and yet one feels nothing for these events, and understands even less.

The passages, which are filled with sometimes horrific, tumultuous events, are bloodless, dull. It reads as if these historical events and locations were researched through a detailed google search or a trip to the library. Even Paris, exquisite, historic Paris, feels flat and uninteresting in Llosa's descriptions. I don't know if it is the writer Llosa or the translator Edith Grossman who has left me so passively uninvolved. Perhaps my expectations were too high for this book ...

The descriptions are very cliché. Two very small examples ... referring to a Japanese character as "inscrutable" in the year 2007? The Africans (read the blacks) who allegedly violate one of the main characters are "savages". A character wanders around the Seine, reciting modern poetry and thinking of Juliette Greco while he contemplates throwing himself into the river ... really? That's what suicidal people do, even those with hopelessly romantic temperaments? In terms of good writing, it's stereotypical and an even worse sin: it is boring and unimaginative.

The indignities that the bad girl are subjected to are disturbing and, I fear, dwelt on too much and in too graphic detail. I wish Llosa had spent more time on developing her psychological portrait and less on the physical aspects of her degradation which really border on the prurient for me.

A few lines at the end of the novel rang true for me and expressed the infatuation Llosa (and some of us) have with Emma when he is speaking of Otilia here: "The truth was there was something in her impossible not to admire, for the reasons that lead us to appreciate well-made works even they're perverse."

I found my sentiments echoed (more eloquently perhaps) in James Lasdun's review in The Guardian a few months ago. My advice, go back to the master: re-read Madame Bovary. You will not be disappointed.