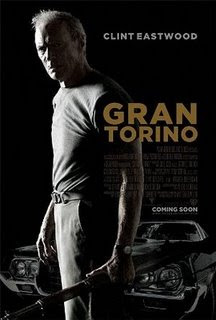 Clint Eastwood's halo is barely obscured by the racist, xenophobic ex-Korean War veteran that he plays in this film. Walter Kowalski is recently widowed, a former vet, who is alienated from his two kind-hearted, if slightly dim-witted, sons and his obnoxious grandchildren who seem eager to paw over his possessions (specifically his Gran Torino car) once he too expires.

He refuses to leave the old Detroit neighborhood now dominated by a growing Asian community of Hmong (pronounced "mung", an ethnic group found in Southeast Asia, including northern Vietnam, Laos, Thailand, and Myanmar-Burma). He inadvertently and reluctantly becomes involved with the family next door when Thao Vang Lor (Bee Vang), an introverted, socially awkward boy, is coerced into trying to steal Walt's car on a dare by a Hmong gang trying to recruit him.
They are thwarted of course by Walter and his sizable stash of weaponry and ammunition. Walt, the octogenarian, is able to fend off a gang member who wants to punish Thao for failing to steal the car. The Lor family and their kin try to thank Walt by bringing food and flowers to his home which he angrily refuses initially despite his lonely and underfed existence.

Soon he is captivated by Sue Lor (Ahney Her), the smart mouthed older teenage sister of Thao, who seeks to mediate between the mystified Walt who merely wants to be left alone and the equally mystified Lor family that only wants to give thanks for his assistance, trying to "repay" him for his protection and atone for Thao's transgressions.
Walt is compelled by Sue to accept the services of the sullen Thao in a series of tasks around his house and the neighborhood. Eventually both embrace these new roles - the teacher and the pupil. Walt finds Thao a job in construction. He tries to "man up" the shy boy in a stereotypically sexist fashion by teaching him to talk about cars, joke in a racist manner with the local barber, and be a bit more crude about girls and male body parts, etc ... it's not offensive really as it is so out there but it is also not particularly funny either.

Racist Walt is thrust into the life of the family and, because this is a Hollywood film, Walt soon grows to care for them and serves as a sort of protector in this troubled neighborhood. Because Thao's family and Walt foil the gang's intentions to embroil Thao in the gang's criminal activities, the gang begins a long and protracted war against both - physically harassing them, destroying their property - compelling Walt to retaliate in the expected and violent manner.

The story reaches a denouement when they target Sue and both Walt and Thao must decide how they will react to this extreme violence.

Since the film Unforgiven (1992), Eastwood seems to have consciously striven to present a path of non-violent reaction to violent situations as if to atone for the outlaw/cowboy/dirty detective savagery of his Josie Wales/The Good, the Bad and the Ugly/Dirty Harry oeuvre. The film follows in this vein.

But Eastwood's cinematic persona is so big, so all encompassing, that it is difficult to believe in this misanthropic, curmudgeonly persona in the early portion of the film. One simply does not believe it. Perhaps as a former war hero with thirteen kills under his belt, Walt's actions may seem credible and one could believe the extent that Walt is willing to sacrifice himself for the Lors. But the conclusion seems too pat, too heroic, to be truly satisfying.

The Asian cast is weak and I can guess why. There is so little work for Asian actors to cut their teeth on. They are usually forced into the old cliched roles: the tight-lipped scientist, the brainy nerd, the vicious gang member.

But this film does reveal to the filmgoer an Asian community that many of us are not aware of and few of us have exposure to. In our home, we are so pleased to see any Asians in the cinema or TV that we are now reduced to yelling "Asians on TV! Asians on TV!" when we see any.