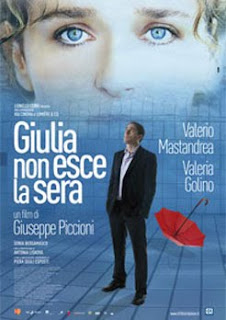 The director Piccione spoke briefly at the beginning of the film and said that it may surprise the audience but he is considered a sex symbol in Italy (considering his Jean-Luc Godard visage - yes).

I knew nothing of this film and am at a loss as to why it does not work for me. Is it possible that it is because we have two main characters, Giulia (Valeria Golino) and Guido (Valerio Mastandrea), equally unhappy (one more so, deservedly) whose lives do not foretell any possibility of happiness or improvement in their circumstances at the end?

Giulia works as a swimming instructor by day. By night, she returns to a prison for women for having killed her lover who had threatened to leave her. That seems an odd arrangement but, hey, I'm not a lawyer. She leaves behind a husband and a young daughter who cannot forgive her for the notoriety the family faced after the murder. The only access the mother has is stolen glimpses of the girl that she spies on in public. She is obsessed with her daughter and this consumes her life.

Guido is a successful literary author up for the prestigious Malaspina Award in Italy. He is also married and bored, or disillusioned, with his spouse (Sonia Bergamasco, the female lead in The Best of Youth from a few years ago). It is unclear why - she is attractive, intelligent, charming, a good mother - could it be, Guido, because she has not read your latest book? I see no discernible reason for his distaste. Even his broodingly dark good looks cannot generate much sympathy in me for Guido even though he seems a kind, thoughtful man.

They meet when Giulia teaches Guido's daughter to swim. An affair ensues but Giulia is predictably tortured ... moody, passionate, angry ... perhaps this is more attractive than the "normal" wife which is something that his wife hints at. Guido is tender and thoughtful with Giulia but she is too far gone, too unhappy to be "saved" by a white knight.

The film does capture the petty jealousies between writers very well, the barely concealed dislike of one's rivals, the eagerness for prizes and recognition that one must conceal in order to seem a serious, respected writer in the service of art. The anxiety about producing worthwhile art.

There are also some lovely Felliniesque images here where the author imagines the characters in his short stories (a girl in an umbrella store floating underwater, a lap dancer with a crush on a priest in the pool where he now swims) but these are too fleeting and infrequent and feel at odds with the rest of the tone of the film

It ends very badly for Giulia and not so well for Guido either and we have learned what ... One shouldn't kill one's lover? An artist shouldn't covet prizes or other women?

Minor TIFF of the Day: This is director Giuseppe Piccione's first time at TIFF. He was invited in 2001 but in the wake of the 9-11 tragedy he was unable catch a flight and to attend the festival.
Posted by A Lit Chick at 9:53 PM