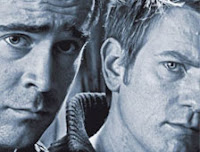 Aaah Woody I will never desert you as a filmgoer (despite your nefarious deeds) even though you are inevitably, inexorably, beginning to repeat yourself dreadfully in your films. In this case, his latest film Cassandra's Dream hearkens back to Crimes and Misdemeanors (1989). My partner says that Allen has not made a good film in twenty years which is, I think, a little harsh but seems to be a view that many share, even those that like him.

Two working class brothers, Terry (Colin Farrell) and Ian (Ewan McGregor), actors whom I really adore, are ensnared in the avaricious schemes of their fabulously wealthy uncle Howard (Tom Wilkinson) who wishes to eliminate a troublesome colleague who could land him in prison with his revelations about Howard's plastic surgery business.

Terry, who works in a garage and is euphemistically considered the "athletic" one, wishes to open a sports shop and Ian, the "smart" one wants to invest in hotels in California with his uncle's money, egged on by his desire to capture a beautiful young actress Angela Stark (Hayley Atwell) who he is courting. The commission of their crime and the subsequent guilt is reminiscent of Judah, the philandering doctor in Crime and Misdemeanours.

I am fairly certain that Allen did not intend the audience to laugh at portions of the dialogue (which happened repeatedly at the screening that I saw). The language is sometime overwrought and stagey and there is not a shred of humour in it. It ends quickly, catastrophically for Terry and Ian, and completely unrealistically to my mind. It wastes the talents of two fine actors. It also reinforces the bleak, almost Scandinavian outlook that Allen brings to most of his films. nowadays

Curiously enough. a 20 something girl behind me in line who had volunteered at the gala the night before at Roy Thomson Hall was regaling her friend, via cellphone, with how "small", "old" and "weird" Woody Allen was at the premiere. Not a glimpse of him today though nor of McGregor or Farrell which might, might, have been worth the price of the ticket.
Posted by A Lit Chick at 6:33 PM