The Best of Youth, Part 2 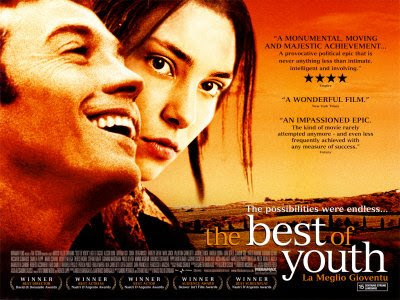 This blog resumes with a continuation of the film's second part (as I said in a previous blog it was originally conceived as a six hour mini-series for television). The posters for the film are so odd, usually showing Matteo (Alessio Boni), the eldest brother, laughing (as above). Perhaps the marketing dept. found the film too intense, too sombre, because this is the antithesis of Matteo in the film. He is brooding, unhappy, rigid, unable to trust or to show emotion except perhaps for anger (and quite a bit sexy I might add - oops I've said too much!).

The director Giordana paints on a very big canvas here ... the flood of the Arno in Florence and the destruction of precious artifacts in 1966, the student riots of the 70s, the Red Brigades' terrorist activities, the Mafia's control of Sicily, the changing status of the mentally ill in institutions.

In Part 2, set largely in the 1980s and 1990s, he tackles the slow death of the Red Brigades (symbolized by Giulia's political activities) and the loss of loved ones in a close and loving family.

We have now reached 1982, Nicola (Luigi Lo Cascio) is living alone with daughter Sara (Camilla Filippi) in Torino. Giulia is still active with the Red Brigades in Roma and Matteo has a new role in tracking down terrorists, serving, I think euphemistically, as an "escort guard" for high officials.

Giulia (Sonia Bergamasco), now fully immersed in the terrorist underground, wavers momentarily from her mission asking to see her daughter from a distance. When Sara sees her mother accidentally she fails to recognize her and Giulia withdraws, shaken.

Part 2 appears to focus more on Giulia's inner conflict. When she is ordered to kill a government official (who turns out to be Carlo Tommasi (Fabrizio Gifuni), one of her partner Nicola's best friends and her sister-in-law Francesca's husband) she wavers and warns her sister-in-law to leave Italy.

Matteo cannot maintain a real relationship with his family or even with close friend Luigi, a former comrade in the police, who became disabled as a result of a beating by rioters in Torino.

Matteo does re-connect with Mirella Utano (Maya Sansa), a pretty librarian and aspiring photographer he met in Sicily who, it seems, has never forgotten him. But he is withdrawn and secretive and incredibly lonely. When a hooker he procures gives him a necklace he admires, Mirella finds it by mistake and he says he has purchased it for her.

Intimacy still eludes the rigid Matteo: he lies about his profession, when he will be in town, even his name. Mirella still thinks he is named Nicola, the name he gave her when they first met years before. He fails to contact her when he returns from his "trip" but drives by furtively watching her as she waits for him fruitlessly.

Matteo disappears from their lives (I will let you find out how) and the family is devastated but tries to move on. Ten years later Nicola sees an arresting photographic image that is part of an art exhibit. He traces it back to Mirella, now a professional photographer and living back home in Sicily. When they meet Mirella reveals that she has a son Andrea, Matteo's son. Nicola persuades his mother to visit the boy in Sicily.

Giorgia (Jasmine Trinca), who floats through the film like a symbol of something that has gone horribly wrong in Italian life, refuses to leave the psychiatric hospital where Nicola works. But after Matteo's disappearance, Nicola persuades her to strike out on her own. Presumably all goes well for we never see her again.

Sara is a young woman now, very much like her mother, headstrong and obstinate. Giulia is still in jail and Nicola is continues to be devoted to her, even going so far as asking her to marry him. She refuses, wants no contact with any of them, ridden by guilt.

The second half of the film resolves all issues but gently ... and slowly. Things will be put right. Everyone will find peace, eventually.

The only character who does not have a satisfying conclusion for her drama is Giorgia.
Posted by A Lit Chick at 9:11 AM