Me and Robert Kaplow and Orson Welles 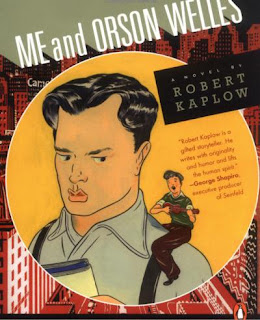 Readers of this blog will remember my embarrassing faux pas at TIFF a few weeks ago regarding the author of this book ... hence the blog's title. I saw the film by Richard Linklater at TIFF and really enjoyed it.

I love stories of this type where you create a fictional character to co-exist with a real historical figure. The insertion of this young 17 year old boy, Richard Samuels from New Jersey, into this exciting situation - the first production of the revolutionary Mercury Theatre in New York in 1937 and his encounter with the great, the maniacal Orson Welles - what a charming idea. I like the mingling of historical fact with a little fantasy. It's a bittersweet New York fairy tale - my favourite kind.

Kaplow captures the innocence, the yearning for freedom and success and yes (I hate this word) the horniness of a boy like Richard.

Richard, dreamy, insecure, talented Richard, wanders into New York city - he loves the theatre, music, Broadway, New York. He is the embodiment of every small town kid who is ambitious and talented and a little naive. He wanders into the path of the opening of the Mercury Theatre in the heart of Broadway and lucks into a small role as Lucius in Caesar set in contemporary Fascist Italy with the assertion that he can indeed sing and play a ukulele (to be disguised as a lute in the play). The character of Richard seems to be very loosely based on Arthur Anderson (the boy who played the role in the original production). The book acknowledges the role of Anderson in researching the history of the production.

Kaplow creates a believable world: the arguments, the ego, the drama, the vindictiveness, the insecurities of the actors in that small, exciting, chaotic theatre world.

Welles, all devastating charm and monstrous ego, manipulates, cheats and bullies his way to this revolutionary first production. Extraordinary to think he was only 22.

The attention to detail, how the theatre office looked, what the stage looked like during the production, who played whom (the roguish Joseph Cotten, the talented but acerbic George Coulouris, the exasperated John Houseman's role as a house manager in the Mercury Theatre), the music that was used, the props, which critics were there opening night ... it creates a vivid, intriguing picture of what it might have been like.

Richard is betrayed and used by several people and grows up a little the process. It breaks your heart to see how casually he is thrown away because he dares to stand up to the controlling Welles and those around him are too intimidated to intercede in any real way. But it feels thoroughly believable too.

It's difficult to think about the book without thinking of the film and probably not fair to the writer - but, oh well, here goes!

I think it was wise to cut out the high school drama in the novel from the film. It's impossible to imagine the telegenic Zac Efron having trouble with girls. He is too good looking to be perceived as geeky, lacking confidence, losing the girl and being embroiled in the sorts of humiliating episodes that Richard experiences at school and with girls in general (as realistic as these scenarios are in a real high school). I think it was a sound decision not to include that aspect of the book in the script.

Likely a face like Efron's was not what Robert Kaplow imagined for Richard but it works in the film because you can easily believe that he is picked from a crowd to play the small role of Lucius, that he momentarily captures the attention of the older more sophisticated Sonja, that he can mill about and mix with these older theatre actors and hands. Perhaps the presence of Richard's "friends" - a group of annoying, bullying boys in the novel - appeals to the demographic (the book is listed as a "young adult" novel) but I think it takes away from the more intriguing aspects of the story (his encounter with Orson and the theatre world).

Sonja Jones, Richard's illusive object of desire, is much more layered in the book - she is a troubled, unhappy girl with huge mother issues but it seems so at odds with the sophisticated veneer of the character - her emotional meltdown about her mother and her sense of identity during her night with Richard feels tacked on, extraneous to the plot. It also doesn't ring true to me. I don't think girls really feel this kind of anger in this way (not that we don't all have our mother issues - ahem!). But I think over-protected boys with overbearing mothers feel this way.

Another small thing which I felt the book did not need was the insertion of two great historical characters attending the play on opening night - it was too much. One encounter with a bona fide genius suffices!
Posted by A Lit Chick at 7:56 AM