There will be much blood ... 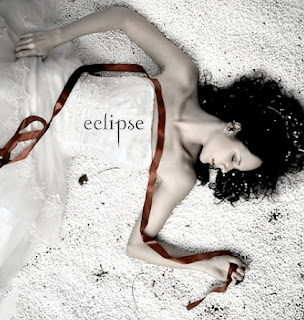 I haven't quite mastered my embarrassment at being taken in by the Twilight franchise. Thankfully, I am not an out and out Twilight Mom, but more an intrigued reader of the books and observer of this phenomenon. If you have nothing but scorn for the franchise best to move on, this blog entry won't interest you. But I have a theory that anything of such monumental cultural influence on young women and teens has touched a chord that we can't, nor should, ignore.

Having seen all three films in the Twilight Saga and read the three books (there is one more to go - Breaking Dawn) I have to say that the films work in a way that the books do not. Meyer is a notoriously long-winded and bad writer (hence the length and repetitiveness in all of the novels) but, as I have said before, she has an unerring eye for capturing the angst of a teenage girl's life and passionate teenage love. No small thing.
This film is tightly edited and the action scenes well constructed. It's beautiful to look at (not to mention there are alot of pretty pore-less people in it who are, for the most part, expertly cast). The music selected is hip and moody and interesting. The director David Slade hits the right notes for the film and the book's demographic - sensuous detail for the romantics and well coordinated action sequences for the male demographic. Lest you think I am being sexist I will mention that I read after the first Twilight film, the producers knew they had captured the teen female demographic with its success but they wanted to snag the male one too by adding more action.

But my interest in the film isn't about how well crafted it may or may not be.

I first became of aware of the books through my now teenage daughter - not a voracious reader prior to this - and I was wondering what had captured her attention so. I knew nothing of the plots or the series. Soon afterward, I attended a book club group at the invitation of a friend and was astonished to learn that all of the members - educated, intelligent, career women - had read all of the books, sometimes more than once. I was, as they say, gobsmacked by the range of girls and women whom the books appealed to.

The actress Kristen Stewart, who plays Bella Swan, perfectly embodies a certain teenage ideal - a beauty who has no idea how beautiful she is, aware, intelligent, sensitive, socially awkward and passionate about the people she cares about. She finds herself caught yet in another struggle between the "bad" vampires led by Victoria (Bryce Dallas Howard) and the good vampires which are comprised of the Cullen family, of which Edward Cullen (the Byronic British dreamboat Rob Pattison), Bella's love, is a member. (I know, I know you are laughing at me already!)

Victoria seeks retribution for the death of her mate James, killed by Edward during a ferocious battle in book one. She hopes to kill Bella to revenge James' death. She marshals an army of "newborns", humans who have recently been turned into vampires and have an insatiable thirst for blood. She finds a human, Riley Biers (Xavier Samuel), who is from Forks, WA, (where Bella and Edward live) as a mate and starts a murderous rampage against humans in Seattle which eventually attracts the attention of both the Cullens and the Quileute Indians of nearby LaPush who shapeshift into werewolves and who are the natural enemies of the vampires. Inevitably, they band together to defeat the "bad" vampires in various horrifically visual ways.

There is another significant subplot where Bella must decide between her love for Edward the vampire and her best friend Jacob the werewolf and in the book the author likens it to the choice that Catherine must make between Heathcliff and Edgar Linton in Wuthering Heights but this is a feeble and silly comparison that is dropped in the film. This device of co-opting romantic duos from great literature for the Twilight series works in the first book (the Lizzie/Darcy tension between the two lead characters is borrowed from Pride and Prejudice) and the second book (a Romeo and Juliet theme of tragic love and misunderstanding set in Italy) but does not really work here in the third installment with the Wuthering Heights love triangle.

Needless to say much blood is spilled trying to save Bella from the vampires - the scent of her blood alone sends them all into a frenzy. But of greater interest, I still believe, as I have posted previously, is the hidden and unspoken of mystique of Bella's virginity symbolized by the manner with which her blood is exalted and fought over. Bella is anxious to rid herself of her virginity; Edward is determined to protect it. He will not sleep with her until they marry which she finally consents to at the end of book three. Her resistance to marriage does strike me as odd if Edward is, as she keeps proclaiming, the man whom she wants to spend the rest of her life with. It is better explained in the book - marrying early signifies giving up and settling for less than what you are or that you suddenly got pregnant which Bella hates the idea of.

Is this strict adherence to chastity on the couple's part in the novel/book consistent with the moral code of the 100 plus year old vampire born before the first world war or a not so hidden message from a practicing Mormon such as Meyer? Meyer plays it both ways...Edwards dutifully sleeps chastely with Bella every night in her room as her protector but she remains a virgin unto (at least) the end of book three.

Finally, I have to say that Edward's paternalism and control over Bella grates more and more as time goes on...what might seem romantic and passionate to a teenage girl in love for the first time is troubling and annoying to a woman my age. That's what I want my daughter J to take away from the books and the films - as much as she may enjoy the franchise, Edward's behavior should be seen through the prism of this fantasy and should not be a template for male/female behavior in her world no matter how attractive its proponents.
Posted by A Lit Chick at 8:03 AM

I am really intrigued about how it will end ... I know bits but not the whole thing. I want to get to it before the last film is released.