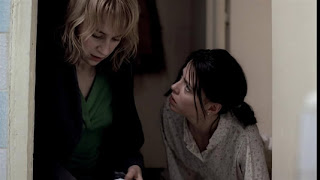 Truly one of the most disturbing films about abortion that I've ever seen. The dialogue and imagery is very graphic and may disturb some viewers of the film and readers of this blog. I would say since having had my daughter and faced a number of infertility issues that my feelings about abortion have evolved since my teenage years when I seriously started thinking about it.

As disturbing as this choice is, the film reinforces my belief that women must have access to safe, legal abortions. The consequences of prohibiting women from doing so are too horrendous for women as this film demonstrates.

The film follows the lives of two Romanian girls, Gabriela 'Găbiţa' Dragut (Laura Vasiliu) and Otilia Mihartescu (Anamaria Marinca), in 1987 during the Ceauşescu regime. At the time, in Communist Romania, abortion was illegal. Ceauşescu's desire was to increase the Romanian population. You may remember the horrendous consequences of this - the deluge of unwanted children (or children who could not be financially supported) in the 1980s that were abandoned in orphanages and the massive movement in the West to adopt these children. This is another frightening side of it that I had not considered - the increase in illegal abortions that must have occurred.

Găbiţa is pregnant and the two girls arrange to meet with an abortionist in a hotel room, the ironically named Mr. Bebe ("bebe" is the word "baby" in Romanian), played very menacingly by Vlad Ivanov.

Mr. Bebe determines that Găbiţa's claim to be in her third month of pregnancy is a lie (it is); it has been at least four months. He asks for more money since it is a much greater offense to abort a four month old fetus. Bebe is, by turns, falsely soothing and sympathetic, as if he is a concerned uncle only wishing what is best for Găbiţa, then turning violent and threatening when he thinks the girls are holding full payment out on him.

He expects something else in return. Otilia reluctantly agrees as Bebe threatens to walk out on the girls. I will not reveal how he is paid.

There is one subtle twist which adds another layer of ugliness to the plot. A nasty seed is planted in the viewers mind that, possibly, Găbiţa knew what might be asked of them in payment and that is why she asks Otilia to accompany her - Otilia is the insurance, the backup, in case the money is not enough. As Otilia figures it out, so do we, and the conclusion is an ugly reflection on Găbiţa and the circumstances in which she makes this decision.

After Bebe injects a probe into Găbiţa, he leaves the girls instructions as to how to dispose of the fetus - warning them not to flush it or bury it where it may be discovered by dogs. His advice is to go to a highrise and throw it into a dumpster from the 10th floor. He is truly is one of the most quietly frightening on-screen characters I have seen for some time.

Otilia leaves Gabriela to go to her boyfriend Adi's mother's birthday as promised earlier. Adi's family and friends irk Otilia - perhaps it's their conservative attitude: young girls shouldn't smoke, shouldn't drink, the "these young people have it easy" attitude ... Perhaps it is Adi's absolute passivity, offering no support or resistance that upsets her. Perhaps it is the idea of sitting there eating birthday cake while Găbiţa is in the hotel room alone. You realize how constricted and difficult the lives of these girls are just by the look on Vasilu's face during this scene.

Otilia reluctantly tells Adi about Găbiţa's abortion, and Otilia starts to fret about what would happen if it Otilia herself got pregnant and how Adi would react. She is not reassured by his response. Otilia decides to return to the hotel.

When she returns, Găbiţa tells Otilia that the fetus was expelled and it is in the bathroom. It's really a frightening sight, certainly not for the squeamish, as the camera lingers on the scene for some minutes while Otilia scrambles to place its remains in something. Otilia wraps up the fetus with some towels and desperately puts it in her bag. Gabriela asks her to bury the fetus, not dump it in the waste. Otilia struggles to find an appropriate place and when she returns to the hotel she tells Gabriela that they will never discuss this matter again.

The title belies Găbiţa's alleged uncertainty - she knows exactly how far along she is and the possible repercussions for what she has done.
Posted by A Lit Chick at 9:38 AM

I hesitate to see this one! I remember reading Caroline Grant's review of this in Literary Mama: http://www.literarymama.com/columns/mamaatthemovies/archives/2008/03/4_months_3_week.html

Coincidentally, I recently saw Vera Drake (directed by Mike Leigh). The characterization is brilliant and subtle and the perspective (that of the abortionist) very different from what you are writing about here. But it's still a very chilling story.

It's very disturbing ... especially if one has been pregnant I think. It's not sensational, actually pretty low key, but not for the faint of heart.