Brando for the summer 2 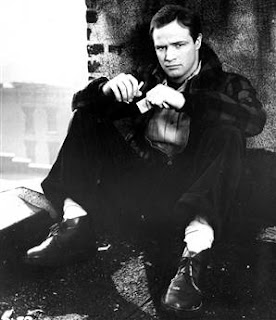 The next film that I would like to recommend is On the Waterfront (1954) with Marlon Brando as the tortured Terry Malloy who struggles to be good, to do the right thing despite the odds against him. A failed prize fighter who took a dive on a fight at the behest of Johnny Friendly (Lee J. Cobb) a mob boss who "owns" him, Terry can no longer fly straight.

Brando made the film after director Elia Kazan, whom he considered a mentor and a friend, gave friendly testimony to the HUAC in the 50s. Despite his initial reservations, Brando gives an emotional, powerful performance. It is easy to imagine that Kazan and Budd Schulberg the screenwriter of On the Waterfront, also a friendly witness to the committee, very much saw themselves as beleaguered men of good will who stood up against an evil organization despite how history might see them now. Justifiably, many directors, screenwriters, actors and others who didn't testify saw their film careers destroyed when they ended up on the Hollywood blacklist.

Terry falls for Edie Doyle (Eva Saint Marie), the sister of Joey, a longshoreman who was testifying against the union bosses that controlled the docks based loosely on real life experiences of longshoreman Anthony Di Vincenzo. Di Vincenzo testified before the Waterfront Commission on the Hoboken, NJ.. docks and endured some ostracism for his activities. In the film, Joey Doyle had testified of the corruption of the unions, extortion, murder and intimidation exerted against the workers who stepped out of line. Terry becomes an unwitting pawn in Joey's death.

Brando captures the simplicity and innate sense of good that Terry has - he does evil but only accidentally, too simple-natured initially to realize the implications of his dog-eat-dog mentality and its effect on other people until he meets Edie.

The things that stand out for me now are not the famous "I coulda been a contender" speech with his brother Charlie (Rod Steiger) or the violent confrontation with Johnny Friendly at the end of the movie where Terry leads the working men back into the docks. Perhaps these scenes have been too imitated, too much praised, to still have the punch they once had.

It's the more quiet moments that strike me now such as Terry listening to the priest Father Barry's (Karl Malden) speech when he declares that the murder of longshoreman Duggan, another whistle-blower, is a "crucifixion" just like the crucifixion of Christ. Brando says very little yet the trace of emotions on his face is powerful: contrition, fear, an awakening of conscience.

After his brother Charlie's death at the hands of Johnny Friendly's henchmen and Terry's testimony against Friendly he is abandoned by "friends". Joey's pigeons, which Terry has taken responsibility for, are all killed by a young friend shocked at his turning against the union bosses. He conveys more sorrow slumping against a wall after he finds the dead birds than any emotional speech might have done.

And his moments with Edie are wonderful. They seemed truly captivated with each other despite her suspicions of his involvement with Joey's death and his legitimate feelings of guilt. Saint Marie is exquisite here. Only nineteen, she conveys passion, innocence and courage in her small, defiant frame.

The 1950s tone of melodrama aside with its overwrought performances by Rod Steiger and Lee J. Cobb, the heightened musical score and bloody makeup in the last scene, the film is still compelling and Brando a revelation to watch.

(Source: with notes from filmsite.org)